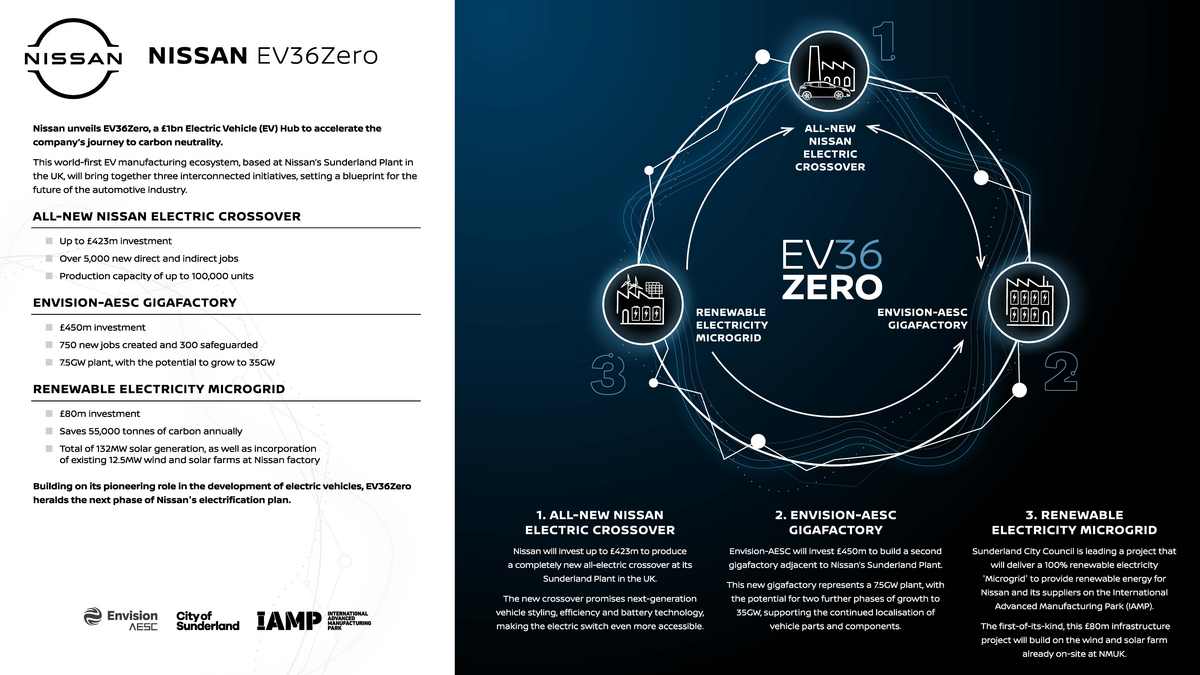 Revolved around the record-breaking plant in Sunderland, UK, Nissan EV36Zero will supercharge the organization’s drive to carbon impartiality and build up another 360-degree answer for zero-discharge motoring.

The groundbreaking task has been dispatched with an underlying £1bn venture by Nissan and its accomplices Envision AESC, a worldwide part in world-driving battery innovation, and Sunderland City Council. Involved three interconnected drives, Nissan EV36Zero unites electric vehicles, sustainable power and battery creation, setting a plan for the eventual fate of the auto business.

Nissan President and Chief Executive Officer, Makoto Uchida said: “This undertaking comes as a component of Nissan’s spearheading endeavors to accomplish carbon lack of bias all through the whole lifecycle of our items. Our exhaustive methodology incorporates the turn of events and creation of EVs, yet additionally the utilization of on-board batteries as energy stockpiling and their reuse for optional purposes.

“Our declaration today emerges from extended conversations held inside our groups, and will extraordinarily speed up our endeavors in Europe to accomplish carbon lack of bias. The experience and skill acquired through the venture declared today will be shared universally, upgrading Nissan’s worldwide intensity.

As part of the £1 billion announcement, Nissan will invest up to £423 million to produce a new-generation all-electric vehicle in the UK. Building on Nissan’s expertise in crossovers and the worldwide success of the Nissan LEAF, it promises next-generation vehicle styling, efficiency and battery technology, making the switch to electric driving even more accessible.

Designed for global markets, UK production will be exported to the European markets traditionally served by Nissan’s Sunderland plant. The new crossover will be built on the Alliance CMF-EV platform, with a forecasted production capacity of up to 100,000 units to be installed.

Production in Sunderland will create 909 new jobs at the plant, and more than 4,500 in the UK supply chain, while safeguarding a further 75 R&D jobs. The transformational project takes the total capital investment by Nissan into the plant past £5bn, and also includes:

Other production locations have not yet been confirmed. More details about the new vehicle, including pricing and technology, will be released closer to the car’s sales launch.

The formal planning process is about to begin for the new gigafactory, which represents an initial 9GWh plant, with potential future-phase investment of £1.8bn by Envision AESC, generating up to 25GWh and creating 4,500 new high-value green jobs in the region by 2030, with potential on site for up to 35GWh. The new plant will increase the cost-competitiveness of EV batteries produced in the UK, including through a new Gen5 battery cell with 30% more energy density which improves range and efficiency. This commitment will power Nissan’s new vehicles, supporting the continued localization of vehicle parts and components with advanced technology. This will make batteries cheaper and EVs more accessible to a growing number of customers in the future.

The new gigafactory will create 750 jobs and safeguard the jobs of 300 current employees.

Lei Zhang, founder and Chief Executive Officer of Envision Group, said: “Envision Group’s mission is to be the net zero technology partner of choice for global enterprises, governments, and cities. We are therefore delighted to be a part of EV36Zero with Nissan and Sunderland City Council. As part of this, Envision AESC will invest £450m in a new, cutting-edge, low-carbon gigafactory in Sunderland creating 700 new jobs.

“This commitment builds on our long-term partnership with Nissan to achieve our global ambition to make high performance, longer range batteries for EVs affordable and accessible for millions more motorists.

“Growth in demand could bring future investment of up to £1.8bn, additional capacity of 25GWh and 4,500 jobs by 2030. This will put the North East at the heart of a new EV hub in the UK, collaborating on R&D around the whole battery lifecycle, from storage, to second life use, V2G smart charging and closed loop recycling.”

Bringing this ecosystem together, Sunderland City Council is leading a project that aims to deliver a 100% renewable electricity ‘Microgrid’ that will save 55,000 tonnes of carbon annually.

With the ability to incorporate the existing Nissan wind and solar farms, initial plans suggest there could be as many as ten solar farms created, with an anticipated 132MW generation, and with a direct connection to renewable energy from the UK grid for ‘firm’ supply to Nissan and automotive companies located on the adjacent International Advanced Manufacturing Park (IAMP). Plans will continue to be developed in close discussion with potential private sector green investors.

A first-of-its-kind, this project is estimated to be an £80 million investment and also includes plans for a 1MW battery storage system using second-life Nissan EV/Envision AESC batteries, which will also allow for excess energy generated during daylight hours to be captured and used at another time, helping to balance demand on the grid. Additional infrastructure projects enabling the creation of the new EV Hub take the total initial investment above £1bn.

Sunderland City Council leader, Councillor Graeme Miller, said: “Sunderland is an ambitious city, and today’s announcement is game-changing one for us, for the region and for UK Plc, and the culmination of many months of partnership working with Nissan, Envision AESC and UK Government to ensure that we landed this transformational project.

“We’re proud to be acting as a key enabler, working to secure an £80m infrastructure project that could be the first of its kind in the UK, bringing together energy generation, consumption and storage through a dedicated microgrid.

“We have a commitment to making Sunderland as a city carbon neutral by 2040 and electrification is a key part of that vision. Today’s announcement places Sunderland at the center of electric vehicle production in Europe. It vindicates the unwavering belief this council has in the city’s ability to drive the electric revolution, working in partnership with the private sector and Government to bring nationally significant projects to fruition, creating jobs and prosperity for our people and businesses, and delivering cleaner, greener cars in the process.”

“Nissan will keep on utilizing its qualities in charge to turn into an organization that keeps on offering some incentive to its clients and society.”

UK Prime Minister Boris Johnson said: “Nissan’s declaration to construct its new-age all-electric vehicle in Sunderland, close by another gigafactory from Envision-AESC, is a significant demonstration of approval in the UK and our profoundly gifted specialists in the North East.

“Expanding on more than 30 years of history nearby, this is a vital second in our electric vehicle upset and getting its future for quite a long time to come.

“Responsibilities like these epitomize our capacity to make many green positions and lift British industry, while likewise permitting individuals to go in a moderate and reasonable manner so we can dispose of our commitments to environmental change.”

Uncovering Nissan EV36Zero at the Sunderland Plant today, Nissan’s Chief Operating Officer, Ashwani Gupta, said: “This is a milestone day for Nissan, our accomplices, the UK and the auto business all in all. Nissan EV36Zero will change what is feasible for our industry and set a guide for the future for all.

“We arrived at another boondocks with the Nissan LEAF, the world’s first mass-market all-electric vehicle. Presently, with our accomplices, Nissan will pioneer the following period of the auto business as we speed up towards full zap and carbon nonpartisanship.”

Expanding on Nissan’s noteworthy 35 years of assembling greatness in Sunderland, the tasks declared today address 6,200 positions at Nissan and its UK providers, including in excess of 900 new Nissan occupations and 750 new Envision AESC occupations at its new savvy, low-carbon battery plant. Longer-term, the groundbreaking undertaking modernizes and extends Nissan’s EV creation ability in the UK.

Imagine AESC, the battery arm of worldwide green tech organization Envision Group, will send coordinated AIoT brilliant innovation to screen and improve energy utilization, assembling and support at its new gigafactory, empowering it to quickly build creation and give batteries to control up to 100,000 Nissan electric vehicles a year.

UK Business Secretary Kwasi Kwarteng said: “This phenomenal speculation by Nissan and Envision AESC addresses a grave obligation to individuals of Sunderland, bringing further high-talented positions and turbocharging our arrangements to step up the North East. This is an enormous advance forward in our desire to put the UK at the front of the worldwide electric vehicle race, and additional confirmation, in case any was required, that the UK stays quite possibly the most aggressive areas on the planet for auto assembling.

“I’m very pleased that Nissan has reaffirmed its faith in Britain, yet is multiplying down on its long-standing obligation to our country. The vehicles made in this plant, utilizing batteries made right not too far off at the UK’s first at scale gigafactory, will play an immense part to play as we progress away from petroleum and diesel vehicles and launch a homegrown electric vehicle producing base.”

Nissan puts Saudi women behind the wheel with surprise instructors