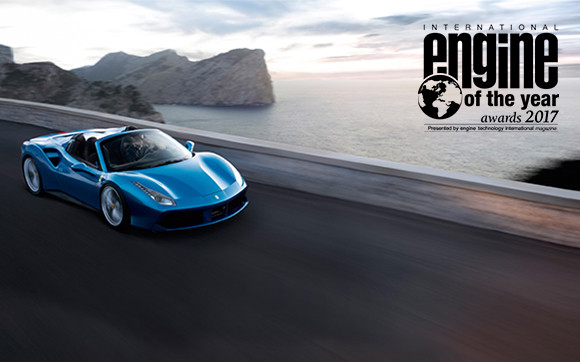 Maranello, 21 June 2017 – For the second year running, the 3.9-litre twin-turbo V8 that powers the 488 GTB, 488 Spider and, in a slightly smaller displacement, the California T and GTC4Lusso T, has taken the outright International Engine of the Year Award along with the Performance Engine class and the 3-litre to 4-litre displacement category.

Since its introduction in 1999, the International Engine of the Year Award has become one of the industry’s most coveted honours. As well as dominating the Award’s Above 4-litre and Performance Engine categories in the past six years, Ferrari has taken a record number of wins for any high-performance sports car manufacturer.

This year also saw Ferrari’s naturally-aspirated 6.3-litre V12 engine, that powers the F12berlinetta and F12tdf, receive the Above 4-litre award for the second year consecutively, and for the third time after the distinction awarded in 2013. This result for the V12 is even more significant this year, as it is this power unit that hailed the start of the glorious Prancing Horse story 70 years ago in 1947.

A concentration of uncompromising engineering solutions, Ferrari’s return to twin-turbo technology for the V8 range has set a new benchmark for turbo-charged engines. Zero turbo lag and a progressive delivery of power and torque throughout the rev range maintain unprecedented levels of driver involvement.

According to Tony Robinson, founder of the International Engine of the Year Awards, “This is only the second time in the history of the IEOTYA that such a powerful performance engine has taken the overall honours two years consecutively and won the most coveted, outright IEOTYA title. The Ferrari V8 is all about amazing power delivery, precision, driveability and a wonderful soundtrack, too. One day soon it’ll be a classic in its own right; indeed I think it is already!”