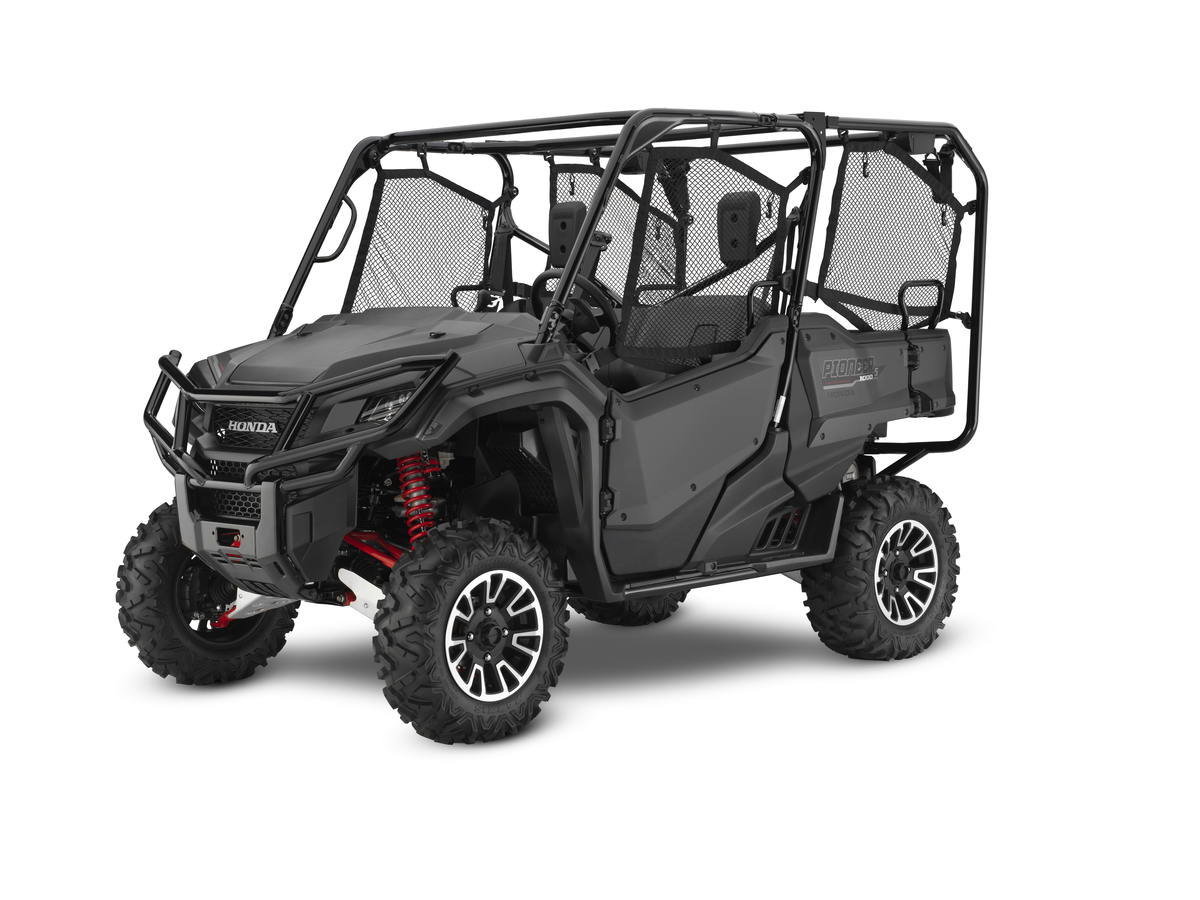 American Honda today confirmed the return of two popular side-by-sides and four ATV models to the 2018 lineup. Headlining the announcement is the Pioneer 1000, which received major updates in 2017. The flagship 2018 Pioneer 1000 Limited Edition remains the most technologically advanced side-by-side on the market, touting the category’s only I-4WD brake traction-control system and automatic Dual Clutch Transmission (DCT). Meanwhile, the adaptable Pioneer 700 remains a great value, with the Deluxe version offering a fully automatic transmission with steering-column-mounted paddle shifters that enable the option of manual shifting.

“The four-wheel segment remains a vital part of Honda’s powersports business, so we’re pleased to continue offering our customers such a capable and fun lineup of products,” said Lee Edmunds, American Honda’s Manager of Motorcycle Marketing Communications. “Whether it be side-by-sides or ATVs, Honda is sure to have a model for everyone.”

The remainder of Honda’s four-wheel powersports lineup will be announced in August.

Entering its third year in Honda’s lineup, the Pioneer 1000 is powered by a purpose-built 999cc parallel-twin engine and is still the only side-by-side on the market with an advanced DCT, a durable beltless transmission that can be shifted through its six speeds either automatically or manually (via steering-column-mounted paddles). Customers can also switch between standard and sport transmission modes depending on the conditions, while drive-system modes include 2WD, 4WD, 4WD Diff Lock, and Turf. In addition, the Limited Edition versions of the Pioneer 1000 come with Fox QS3 shocks and the industry’s first I-4WD brake-traction-control system, which also allows hill-start assist and electronic brake-force distribution. All five-seater Pioneer 1000 models have Honda’s unique QuickFlip® seating, which allows owners to switch between rear seating and a cargo bed, and non-LE five-seat models have self-leveling rear suspension. In all, the Pioneer 1000 is available in six different configurations, and all can be personalized via a wide array of Honda Accessories, including packages for hunting and work.

Striking an ideal balance in terms of size and power, the affordably priced Pioneer 700 has a 675cc liquid-cooled, single-cylinder, fuel-injected power plant and a low-maintenance, beltless automatic transmission. Ready to tow and haul for work, or to hit the trails on weekend adventures, Honda’s midsize multipurpose side-by-side is available in two- and four-person configurations, the latter offering the capability of folding down the rear seats to create more cargo space in the rear tilt-bed. Deluxe versions come standard with electric power steering, painted plastic, aluminum wheels, and a manual shifting mode with steering-column-mounted paddles. Long-travel, double-wishbone suspension at both ends delivers a smooth ride, and owners can customize their units via a large catalog of Honda Accessories.

The four-member, 500-class family of premium Foreman Rubicons is packed with powersports-category exclusives. For example, the Rubicon 4×4 EPS is the only ATV offered with a combination of a tough manual-shift transmission and independent rear suspension, and for those who’d rather not do all the shifting themselves, the other three variations come with Honda’s revolutionary DCT gearbox, a durable, beltless geared system that has dual ranges and can execute shifts seamlessly. The IRS contributes to an impressively comfortable ride, even when spending long days in the saddle, along with excellent handling over rough terrain. The long list of available features includes Electric Power Steering (EPS), and all models can be switched between three drivetrain settings: 2WD, 4WD and 4WD with Differential Lock.

Not only does the refined Rincon boast Honda’s biggest ATV engine (a liquid-cooled 675cc single with a twin-plug cylinder head), it makes more efficient use of that power plant by mounting it longitudinally in the chassis, so that the crankshaft is aligned with the vehicle’s direction of travel. This achieves a number of benefits, including a more direct link to the rear axle. The Rincon is a premium model, with independent rear suspension and a three-speed automatic transmission, proving that a luxurious user experience is possible even in the rough world of ATVs.

At the opposite end of the spectrum from the Rincon is Honda’s 229cc Recon, an ATV that’s relatively small in size but big on fun and value. Recognizing the importance of easy maneuverability for some users, engineers gave this model a small footprint and a light overall weight, resulting in nimble handling. As is the case with their larger models, Honda offers Recon customers options when it comes to the transmission, with a manual, foot-shift gearbox and electric, push-button ESP shifting both available. The Recon is now available in Vapor White, as well as Olive.

Now available in a new Active Yellow color (as well as Red), Honda’s TRX250X has rightfully earned its reputation as the most approachable sport ATV on the market. Merging tried-and-true off-road capabilities with commonsense Honda technology, the TRX250X is sporty, fun, reliable, and user-friendly, all while remaining remarkably affordable. Just engage the SportClutch™—essentially an anti-stall setup with manual override capabilities—and the TRX250X provides smooth torque, pulling steadily into a broad offering of midrange power before settling into the lengthy top end. Meanwhile, the TRX250X has an agile cornering character, giving the rider predictable handling over a wide variety of terrain types. Out front, the independent double-wishbone suspension tackles off-road obstacles with confidence, providing a smooth ride, and the single-shock rear suspension ensures that the ATV tracks straight and level. Up-and-coming riders will love the TRX250X’s usable nature, but make no mistake—this machine is still a ripper.