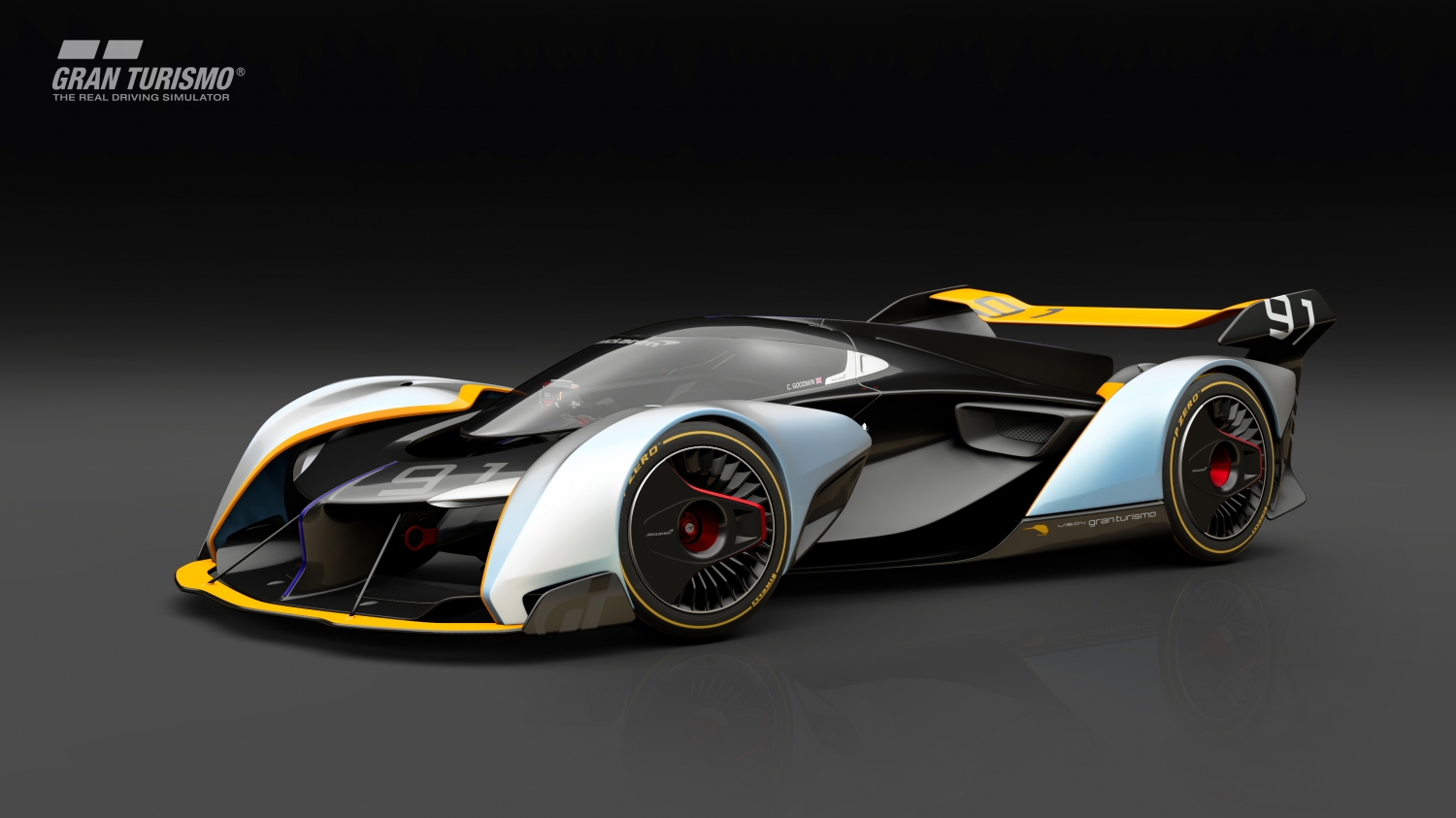 An extreme McLaren Gran Turismo racing car is today confirmed as an exclusive choice for gamers in the hugely anticipated PlayStation 4 title, Gran Turismo Sport, which will be available starting October 17, 2017.

Designing for the virtual world and unburdened by production car constraints, the team that created the McLaren Ultimate Vision Gran Turismo pushed the boundaries of McLaren design well beyond current realities, while remaining true to inherent principles.

The design form of the McLaren Ultimate Vision Gran Turismo follows its function, meaning every single line and detail has a purpose. Just like McLaren’s road cars, the teardrop cabin and extensive glazing ensure exceptional visibility. And being single-minded in putting the driver first, meant an innovative approach to seating – the driver is positioned not just forward and centrally in the chassis, but lying on their front, with the rest of the car ‘shrink wrapped’ around them.

“We wanted to break new ground and to innovate and the McLaren Ultimate Vision Gran Turismo does exactly that. It puts the driver absolutely at the centre of the action, delivering a sensory overload with incredible sound and awe-inspiring acceleration. From the game player’s point of view, the driving experience in this car will be like nothing else: the amazing glass cockpit and the motorcycle-like driving position – with your head far forward, almost right above the front axle – combine to allow you to see exactly where the apex of the corner is so you can shave vital milliseconds off each lap.More than anything though, the McLaren Ultimate Vision Gran Turismo is a stunning looking car. The design form communicates exactly what the car’s mission is and what its intentions are: it’s the ultimate expression of the McLaren design pillars and principles we have already established, futured into the 2030s.” Rob Melville, Design Director, McLaren Automotive

McLaren pioneered the use of carbon fibre in Formula 1 and the strong, yet lightweight material forms the chassis of all McLaren road cars. Featured extensively in the upper structure and body of the McLaren Ultimate Vision Gran Turismo as well as in the chassis, carbon fibre helps to deliver a virtual kerb weight of just 1,000 kg.

The McLaren Ultimate Vision Gran Turismo features ultra-advanced active aerodynamic technology. Called Integrated Active Aero, it works by opening tiny aperture covers around air inlets on key surfaces during cornering to create drag and generate downforce, rather than moving the surfaces altogether. This gives the handling benefits of active aerodynamics with a reduced number of moving parts that benefits both complexity and weight. Centrally mounted carbon-ceramic disc brakes reduce unsprung mass and the driver is also able to monitor brake temperatures during racing.

Power comes from a break-through hybrid drivetrain. A twin-turbo, 4.0-litre McLaren V8 engine drives the rear wheels, while high output electric motors are housed in each of the front wheel ‘pods.’ Game players will be able to call upon maximum power of 1,150 PS, with 1,275 NM of torque available instantly from launch, thanks to the electric propulsion and all-wheel traction. Capturing the essence of the spine-tingling sound experienced when driving a McLaren at full throttle was a critical part of the McLaren Ultimate Vision Gran Turismo brief and as such, the exhaust system and hybrid drive work together to generate a unique thrill for the ears, even in the cabin.

“I created the Vision Gran Turismo project to give car manufacturers the opportunity to design something that has all of the characteristics of their brand, and will live on as a playable vehicle in Gran Turismo. Many of the cars have become legendary in their own right, continuing to shine for years and attracting players from different eras. For me, a car needs to be an extension of the driver; I am focused not just on the appearance, but on the handling, the sound of the engine, and the feeling you get when you are racing. So, it was an honour to work with McLaren to bring the Ultimate Vision Gran Turismo to life, and to put such a car on the circuits of Gran Turismo Sport for players to enjoy driving at the limit.” Kazunori Yamauchi, Gran Turismo creator, President of Polyphony Digital Inc.

Gran Turismo Sport, which will be available starting October 17 of this year, is the latest release in the world-renowned Gran Turismo series for the Sony PlayStation. Gran Turismo Sport gives players the opportunity to choose their preferred car from a range of production and concept vehicles and compete at one of 17 locations, including the Nürburgring 24 Hour circuit, Brands Hatch and other world-class circuits. Designed exclusively for the game, the McLaren Ultimate Vision Gran Turismo will join real-life McLaren models such as the McLaren 650S Coupe and 650S GT3.