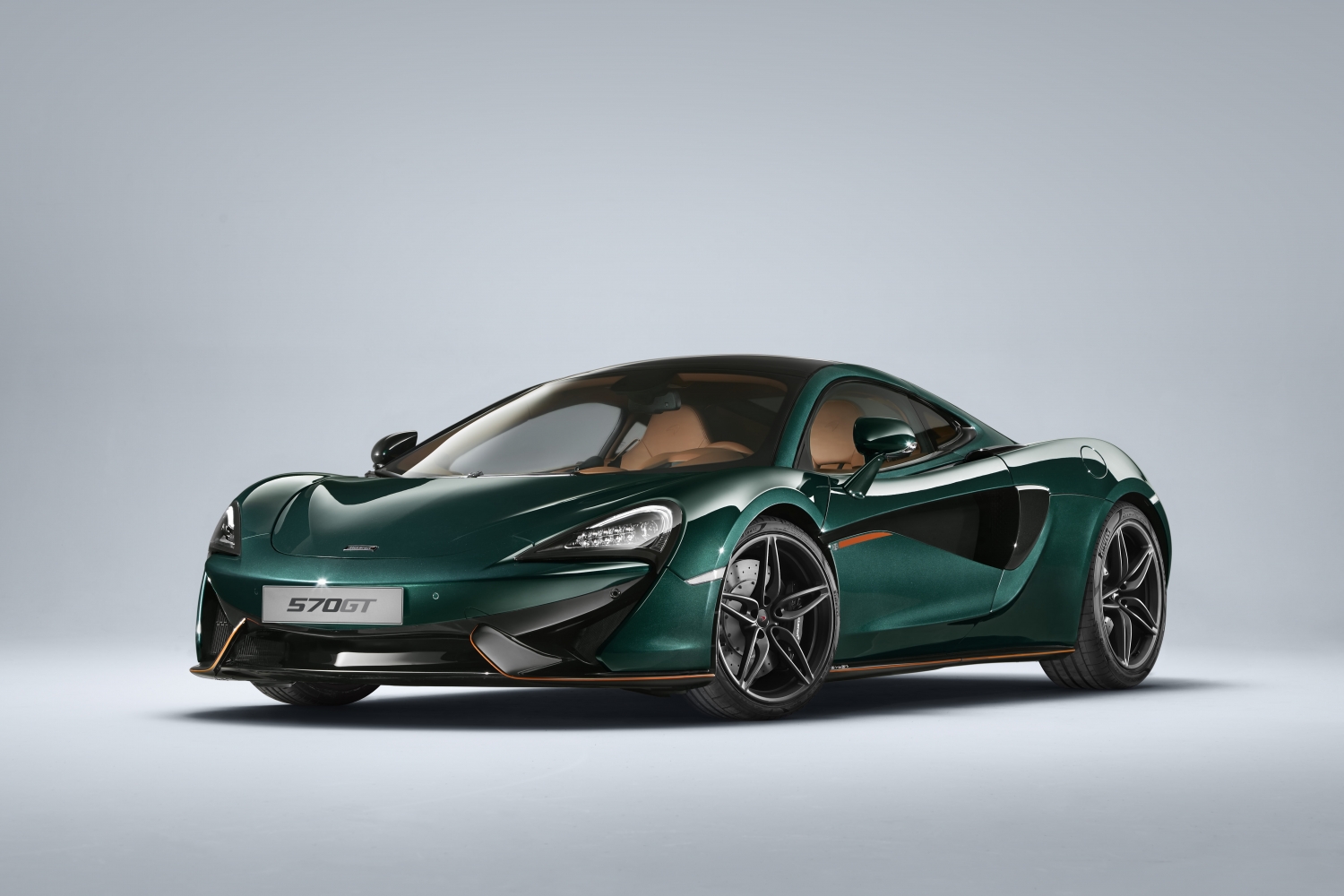 A limited number of bespoke McLaren 570GT models will this month become available to a fortunate few McLaren buyers in the UK and Europe. Commissioned from McLaren Special Operations as an MSO Collection, the six cars are finished in McLaren historic ‘XP Green’ exterior paint – the same colour as the famous F1 XP GT ‘Longtail’ homologation model built in 1997. The Saddle Tan leather interior additionally features green leather inserts in the seats and green contrast stitching, as well as a dedication plaque mounted on the centre tunnel beneath the infotainment screen identifying each car as one of six in the Collection.

The exterior of the car is adorned with Saddle Tan aero pin-striping edging the front aero blades, side skirts and rear diffuser, while each door carries a stripe of the same colour that runs rearwards from a subtle Union Jack emblem finished in silver-grey. MSO Black exterior components replace the front splitter, door inserts, side air intakes, side skirts and rear bumper, diffuser and spoiler, all of which would usually be finished in Dark Palladium or body colour.

“Any McLaren is a very special vehicle, but we are also seeing an increasing number of buyers expressing a desire to personalise their cars with additional features and options as well as colour and trim choices outside of the core specification offered,” explained Jolyon Nash, McLaren Automotive Executive Director, Global Sales and Marketing. “As well as making it possible for individual McLaren owners to have exactly the McLaren they want, McLaren Special Operations will continue to create limited-volume collections such as these six 570GT models in XP Green, to further extend customer choice.”

The McLaren 570GT is the most luxurious and refined Sports Series model, providing long-distance comfort and increased versatility while retaining a thrilling driving experience. Subtly visually different to the 570S Coupé, its classic GT lines sweep down into a side-opening rear glass hatch to provide an additional 220 litres of storage on the leather-lined touring deck, as well as an instantly recognisable identity. Chassis settings deliver the additional comfort expected from a car designed for touring, with spring rate stiffness reduced by 15% at the front and 10% at the rear compared to the 570S Coupé. The 570GT remains though a serious sports car, its 3.8-litre twin-turbocharged McLaren V8 engine producing the same outstanding 570PS and 600Nm as the Coupé, with performance to match.

The inspiration for the MSO colour and trim enhancements on the six 570GT models in the Collection is a combination of traditional British automotive hues and a very special car from McLaren’s own history – the F1 XP GT.

Although conceived as a road car, the McLaren F1 enjoyed significant motorsport success, including victory at the 24 Hours of Le Mans in 1995 on its first attempt. This meant that further track competition beckoned and to keep pace with dedicated racing opposition, a ‘Longtail’ GT race car was developed. F1 XP GT, instantly recognisable by the extended rear bodywork and distinctive colour, was the original road-going prototype built to satisfy the homologation requirements of motorsport governing body, the FIA. The car’s deep bottle green paint finish, cherished as XP Green in McLaren Special Operation’s historic paint palette, is now reserved for bespoke commissions.

The XP Green 570GT cars will be going to owners in the UK, Germany and the Netherlands. The MSO content in each is identical and adds £21,000 to the final price of the vehicle, which will depend on other options chosen. A specification that encompasses a By McLaren Designer Interior, GT Upgrade Pack (which includes vehicle lift, rear view camera, volumetric alarm upgrade, Bowers & Wilkins audio system and car cover) and 5-Spoke Lightweight Forged Wheels in Stealth finish among the options gives the XP Green MSO Collection McLaren 570GT a price of £188, 567.