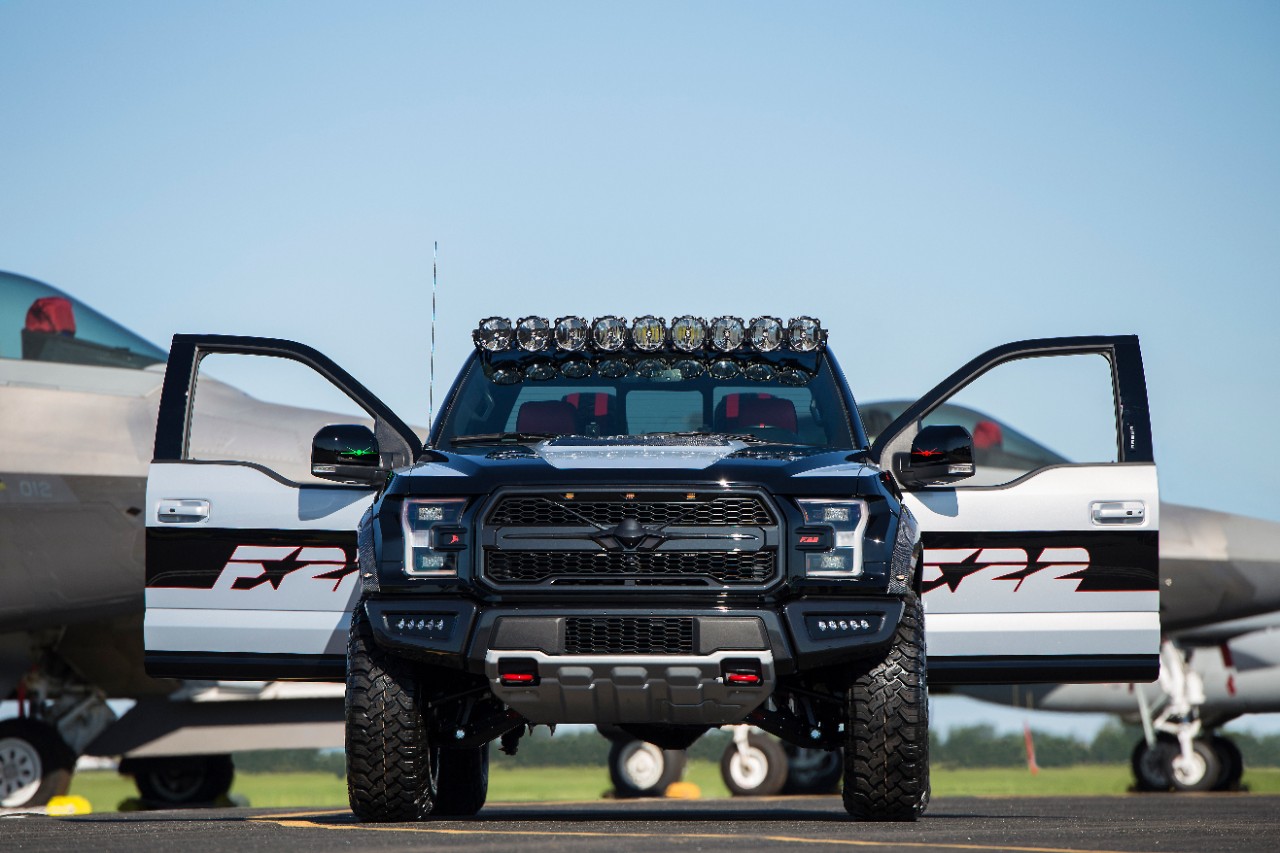 Combining the best attributes of the world’s finest high-performance machines for air and ground, Ford’s design team created a Ford F-22 F-150 Raptor based on the U.S. Air Force’s Lockheed Martin F-22 Raptor fighter jet for auction at AirVenture Oshkosh. The one-of-a-kind truck fetched $300,000 for the Experimental Aircraft Association Gathering of Eagles – an organization and an event committed to aviation and encouraging youth involvement in flight.

Ford has raised more than $3 million for the annual event since 2008 by creating collector’s edition vehicles, with F-22 F-150 Raptor the premier offering at this year’s live gala July 28. Ford served as exclusive automotive sponsor of the 2017 AirVenture Oshkosh fly-in at Wittman Regional Airport in Oshkosh, Wisconsin.

The F-22 F-150 Raptor was purchased by Gary Ackerman of Gaudin Ford in Las Vegas, Nevada. The vehicle has found the perfect home in that Ackerman serves as Honorary Commander/Ambassador for the United States Airforce’s F-22 Squadron at Nellis Airforce Base in Nevada.

Ford design manager Melvin Betancourt and Ford Performance led design and engineering of the F-22 F-150 Raptor. “Our job – both in the air and on the ground – is to intimidate the competition,” said Betancourt. “The money we raised will enable Young Eagles to reach for the skies as well.”

Nicole Rush, Ford designer, and the Ford design fabrication team headed up interior enhancements. With the loftiest of expectations for unrivaled care and precision, building the F-22 F-150 Raptor was entrusted to Brad and Doug DeBerti at internationally renowned DeBerti Design. Betancourt says Ford could not have asked for a more purposeful execution of its vision than what the DeBerti team accomplished.

“Few things are as streamlined, as gloriously intimidating as the shape, metallic color and sinister speed a fighter jet represents,” said Betancourt. “The simple, extreme functionality of the cockpit alone proved inspiring, prompting the team to create matte finishes, purposeful gauges, controls for ready proximity and dramatic LED lighting for the instrument panel.”

Todd Eckert, Ford truck group marketing manager, said the F-22 F-150 Raptor celebrates the fighter jet’s dominance of the skies and the consistent leadership of F-Series on the ground. “Our long-standing commitment to Young Eagles encourages new talent to enter the world of flight, while highlighting the freedom, power, speed and agility shared by the Ford F-150 Raptor and the F-22 Raptor fighter jet,” he added.

“Ford has helped build unmatched pathways for young people to discover the world of flight through its support of our Young Eagles, our youth programs and AirVenture,” said Jack Pelton, CEO and chairman, Experimental Aircraft Association. “With its powerful F-150 Raptor donation inspired by aviation, Ford continues to excite with its specialty vehicles, which reflect the depth of its commitment to the Experimental Aircraft Association, its members and the future of flight.”