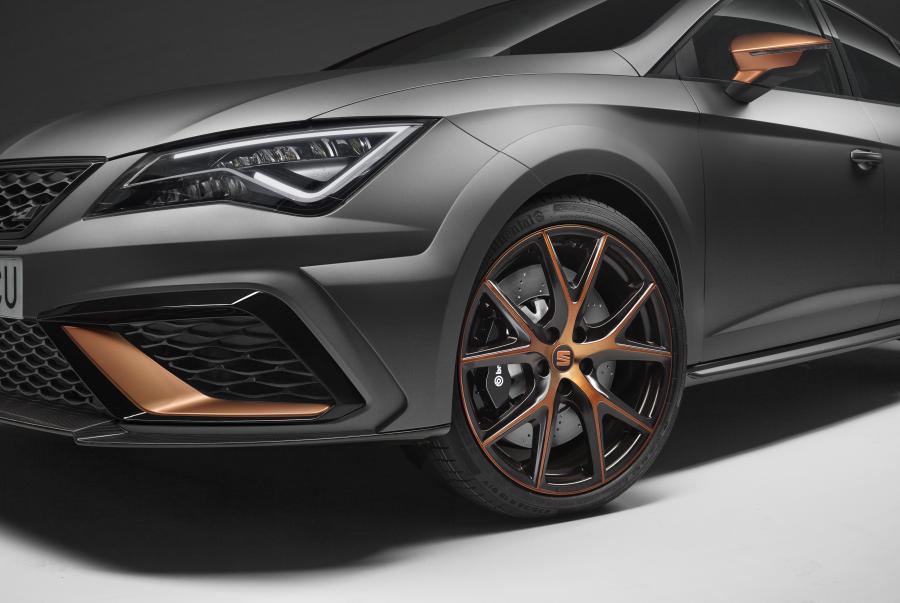 The New SEAT CUPRA R is making its public debut at the International Frankfurt Motorshow where SEAT is presenting a new definition of exclusiveness, performance and distinction within the CUPRA model. Only 799 lucky drivers will be driving the New SEAT Leon CUPRA R, the most powerful and exclusive road car ever manufactured by SEAT. This will be a limited edition destined for those CUPRA fans that are looking for an even exclusiveness car in the CUPRA world. If a SEAT CUPRA customer likes to drive powerful sports cars that are fun to drive, of course with that fine balance between dynamism, comfort, versatility, safety and technology, the New SEAT Leon CUPRA R is the peak of exclusivity, taking driving pleasure to another level, never seen before in a SEAT. More sports car qualities, yes, but above all a unique model that won’t be made again. A demonstration of the best technology, the best safety, the best connectivity, the best versatility, the best design and the best dynamism. In short, it represents the very best qualities of SEAT and what SEAT is capable of, hence why it will be available to only 799 lucky drivers.

There will be two versions of the new SEAT Leon CUPRA R, both with front wheel drive; 300 units will come with a six-speed DSG and the familiar 300 horsepower 2.0 TSI, while the other 499 will come with a manual gearbox, also with six speeds. This model come with the same engine but with a slight increase in power to 310 horsepower, a new record for the Spanish brand. The new Leon CUPRA R of course has the most advanced and efficient technology to satisfy the likes of even the most demanding driver. That’s why, in order to get the most out of such a brilliant engine, the Leon CUPRA R comes with adaptive suspension DCC (Dynamic Chassis Control), a progressive steering system and a VAQ self-locking differential as standard. The drivers of the New Leon CUPRA R will be able to adjust the car’s driving mode to their preferences thanks to five Drive Profile modes; Comfort, Sport, Eco, Individual and of course, CUPRA. This new driving mode increases the emotion during the driving.

The bodywork of the New SEAT Leon CUPRA R has received some significant revisions. The wing mirrors come in copper, the 19-inch alloy wheels have been exclusively designed and the wheels are powerfully framed by the new wider wheel arches that really bring out the car’s character. Carbon fiber is one of the most visually striking features of the new Leon CUPRA R; easily seen on the front and rear spoilers, side decorative skirts and the rear diffuser, which frames the exclusive and powerful double exhaust. The front bumpers look impressive and are enhanced by newly designed lateral air intakes.

In the interior, an exclusive serial numbered engraved on the console just in front of the gearstick as a reminder that we are in a very limited edition. The bucket seats have copper stitching that also appears on the steering wheel and the gearstick is upholstered in Alcantara®. The seats are also upholstered with Alcantara. The copper colour also appears on the frames of the dashboard, while the door panels are covered in look carbon fiber. The instruments receive new aesthetic details, a new white cluster has been created, and when the start button is pressed, there is a welcome message exclusive to the CUPRA R that appears on the 8-inch colour screen.

The production of SEAT Leon CUPRA R will begin in the second week of November and will go on sale at the end of the year.

A little bit of history

The new Leon CUPRA R is SEAT’s fifth model with this exclusive name. The first model was the 180 horsepower Ibiza CUPRA R 1.8 20VT introduced at the end of 2000. It was the first road car developed by SEAT Sport on the second generation Ibiza chassis and only 200 units were made. It came with bigger Brembo brakes at the front, it was wider, had bigger wheels and tyres from OZ and firmer damping. ESP and air conditioning came as standard, its safety belts were red and the SEAT Sport badge was stitched onto the bucket seats.

At the Barcelona Motor Show in 2001 the first Leon CUPRA R, also created by SEAT Sport, was presented, going on sale a year later. It also had the 1.8 20VT engine but this time wth 210 horsepower. In contrast to the first Leon CUPRA, which came with a naturally aspirated engine and all-wheel drive, this CUPRA R had front-wheel drive and as such was lighter, plus more straightforward rear suspension. It could reach 237 km/h and went from 0 to 100 km/h in 7.2 seconds. SEAT Sport modified the front brakes (also Brembo) and damping, which was also firmer.

Not much time passed for SEAT to improve the CUPRA R, which went on to have 225 horsepower. This allowed it to get up to 242 km/h and go from 0 to 100 km/h in only 6.9 seconds. Recaro sports seats could also be ordered which limited the cockpit to four seats.

The fourth CUPRA R – although a third generation Ibiza prototype that was exhibited at the Geneva Motor Show in 2003 – arrived in 2009 with the second generation Leon. With its 265 horsepower engine, the SEAT Leon CUPRA R 2.0 TSI was at the time SEAT’s most powerful car in its history. It could go from 0 to 100 km/h in 6.2 seconds and reached a top speed of 250 km/h. Next to the normal Leon CUPRA which had 240 horsepower, the CUPRA R came with firmer springs, and sport steering feeling, modifications to its engine management and exhaust, as well as small changes to the gearbox. The electronic self-locking XDS differential stood out from a wide range of equipment that came as standard.

The New SEAT Ibiza, An Excellent Option in the Segment