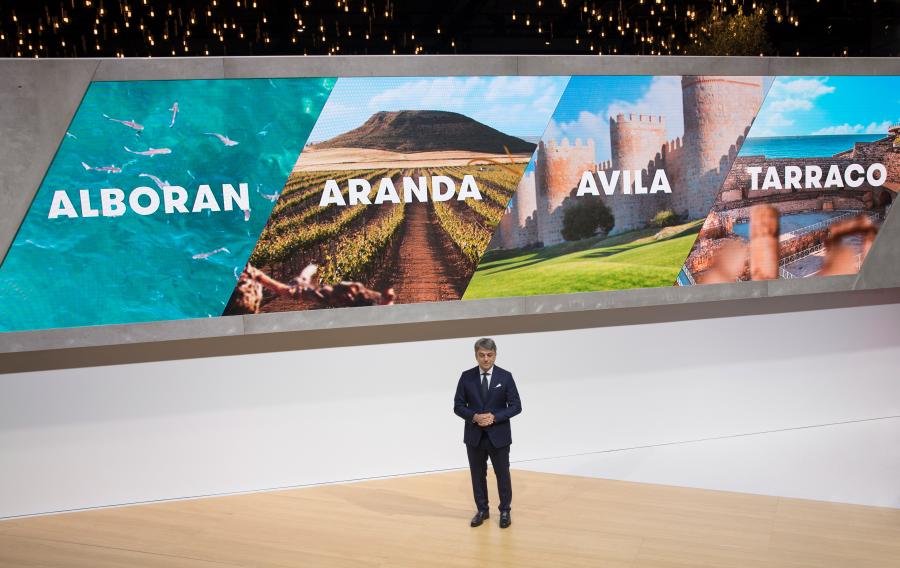 Alboran, Aranda, Avila or Tarraco. One of these four Spanish place names will designate SEAT’s new SUV, which will be going on sale in 2018. SEAT President Luca de Meo made the announcement today during his speech at the Frankfurt Motor Show, which opened its doors this morning to the press.

From today and until next September 25th, anyone who wants to vote for their preferred candidate can make their selection via the webpages seat.es/buscanombre or seat.com/seekingname. The place name which receives the highest number of votes will be the winner.

The four finalist names made it through to the second last stage of the initiative to designate SEAT’s large SUV, the third one following the Ateca and the Arona. This phased required the brand to organise several focus groups in its main markets, as well as testing in the countries where the company operates in order to select the four finalist names among the nine previously shortlisted.

Speaking about the four candidate names and the excellent response obtained by the initiative, SEAT President Luca de Meo pointed out during his presentation at the Frankfurt Motor Show that “Alboran, Aranda, Avila and Tarraco meet all the necessary requirements for becoming another one of SEAT’s emblems. The project has been a clear success and we would again like to thank all of the more than 133,000 fans in 106 countries who collaborated on the initiative. All that remains now is the final stage, and we encourage everyone to participate in the vote”.

Alboran: the Alboran Sea is the westernmost portion of the Mediterranean Sea. A major driver of the western Mediterranean water cycle, it is home to the greatest diversity of species in the seas of Europe.

Aranda: a city of more than 32,000 inhabitants in the province of Burgos, located in the region of Castile and Leon, it is the capital of the Ribera del Duero county, famous for its production of wine.

Avila: a city in the region of Castile and Leon, at 1,131 metres above sea level it is the highest provincial capital in Spain. The wall surrounding the old town is a symbol of the city.

Tarraco: it is the name of the former Roman city, one of the most important of ancient Hispania, which today is Tarragona. Its archaeological remains received the UNESCO World Heritage designation in 2000.

The initiative #SEATseekingName, launched last 1 June, received a total of 133,332 proposals from SEAT fans in 106 countries, who put forward 10,130 different Spanish place names following the guidelines defined by the brand. The selection continued through a strict process involving linguistic and legal criteria, as well as ensuring that the names matched the brand values and the product characteristics of SEAT’s new SUV.

After selecting the finalists, the name of SEAT’s new SUV will be announced before next October 15th. For the first time in the history of the brand, the name given to one of its models will be chosen by popular vote, and will join the 13 other Spanish place names that, beginning in 1982 with the Ronda, have designated vehicles in the SEAT model lineup.

The new Arona, the CUPRA R and Amazon Alexa , SEAT highlights at the Frankfurt Motor Show

In the framework of the Frankfurt Motor Show, SEAT also announced today that will be the first car brand in Europe to integrate the Amazon Alexa interactive voice service in its vehicles, developed by the US e-commerce giant Amazon. The voice-controlled interactive service will be available at the end of this year in the company’s Leon and Ateca models, and in the Ibiza, Arona and the large SUV in 2018.

In a world’s first, SEAT also presented in Frankfurt the brand’s new urban crossover, the SEAT Arona, which is on sale as of today with prices starting at €15,990. Two further great breakthroughs have also been highlighted: the exclusive Leon CUPRA R, a limited edition of the brand’s most powerful car, of which only 799 units will be on the market when it becomes available in late 2017; and the new Ibiza 1.0 TGI, the compressed natural gas fuelled version of SEAT’s bestseller.

Digital lifestyle at the BMW Group: Seamless in-car integration of Amazon Alexa in BMW and MINI.

The New Seat Leon Cupra R: The Best One Isn’t Yet To Arrive, It’s Already Here

The New SEAT Ibiza, An Excellent Option in the Segment