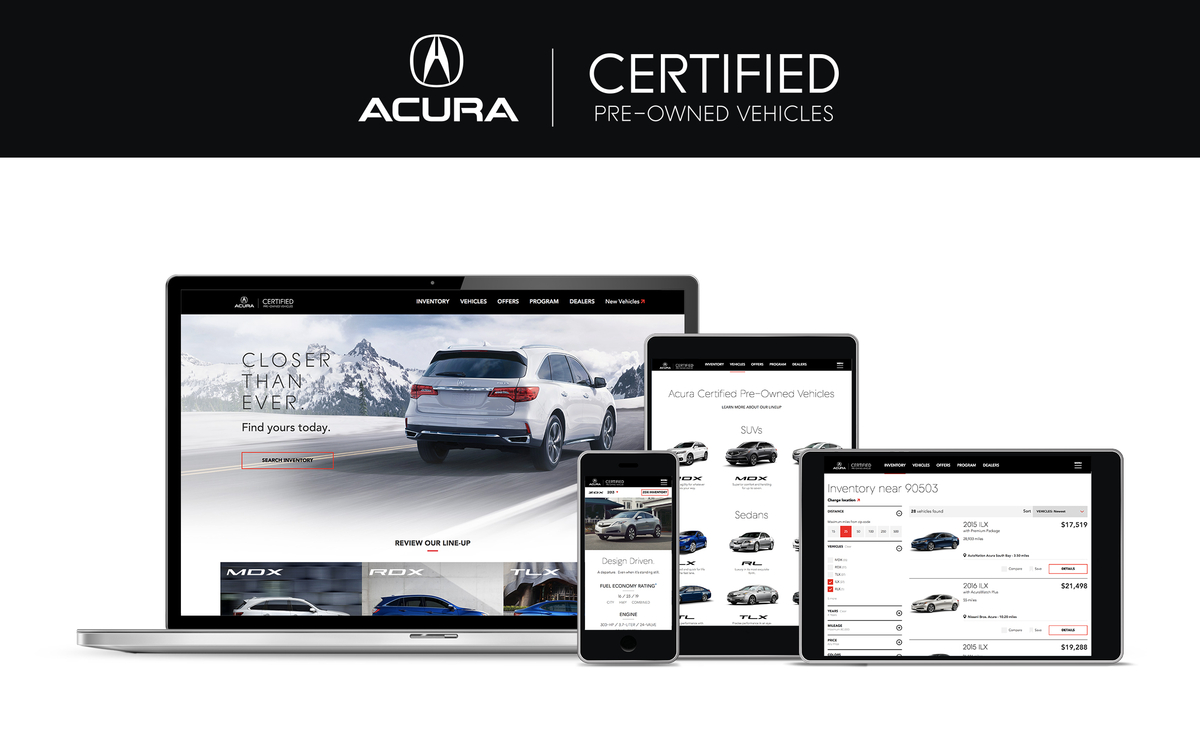 “With the booming growth in Acura Certified Pre-Owned sales and tremendous increase in online and mobile vehicle shopping, we are relaunching the Acura CPO site to offer users a more seamless and interactive experience,” said Dan Rodriguez, Manager of Auto Remarketing, Certified Pre-Owned at American Honda. “Based on input we received from our customers and dealers we’ve reengineered our Acura site to make comparisons simple, and help shoppers make the best choice for a used vehicle.”

The 2018 Acura ILX sport sedan arrives at Acura dealerships beginning tomorrow with a new Special Edition featuring A-Spec goodies that include aero body components, 18-inch wheels and unique badging. The 2018 ILX starts with a Manufacturer’s Suggested Retail Price (MSRP1) of $28,100, with the new Special Edition coming in at $28,900. ILX serves as the gateway model to the Acura lineup and has posted month-over-month sales gains every month this year, appealing to new entry-luxury buyers with its sophisticated design, lively performance and upmarket quality.

For 2018, the Acura ILX adds a Special Edition trim, which includes 18-inch wheels, side sills and a rear spoiler from the A-Spec package, making it an excellent value in its class. The Special Edition adds to a long list of standard equipment on all ILX models including Acura JewelEye® LED headlights, an 8-way power driver’s seat, multi-view rearview camera, auto on/off headlights, one-touch power moonroof, Bluetooth® HandsFree Link®, 5-inch Multi-View Display, keyless smart entry with push-button start, security system, and a leather-wrapped steering wheel and shift knob. In addition, the AcuraWatch™ suite of active safety and driver-assistive technologies is available on all ILX models.

2. Based on 2018 EPA mileage ratings. Use for comparison purposes only. Your actual mileage will vary depending on how you drive and maintain your vehicle, driving conditions and other factors.

Honda has released its 2017 North American Environmental Report (NAER) detailing the company’s environmental activities in North America, and disclosing the results of its efforts over the last fiscal year.

The NAER illustrates Honda’s Environmental Vision as well as its approach to managing environmental efforts throughout the company. The 51-page report also explains Honda’s views on public policies as they pertain to energy usage and development of alternate-fuel vehicles and technologies.

“Our efforts to minimize Honda’s environmental footprint extend beyond the products we make to all elements of our business,” said Toshiaki Mikoshiba, president & CEO of Honda North America, Inc. “As a mobility company, it is Honda’s responsibility to help address these issues with innovative thinking, technologies and product designs.”

The 2017 NAER is Honda’s 13th annual report on the environmental impact of its operations in North America, including the United States, Canada and Mexico, and covers the period from April 1, 2016 to March 31, 2017 (fiscal year 2017).

Honda also began the launch of its Clarity series of advanced environmental vehicles, starting with the Clarity Fuel Cell in late 2016. The Clarity series is at the forefront of Honda’s effort to grow its portfolio of electrified vehicles.

Honda improved its efficiency of OEM parts shipments throughout North America in FY17, reducing trailer deliveries and truck/rail travel by 19 percent and avoiding 1,154 metric tons of CO2, a 162 percent improvement from year-ago results.

Honda was able to maintain waste sent to landfills from its 12 U.S. parts warehousing and distribution centers at the eight-year low 0.5 percent reached in FY2016.

The CO2 emissions intensity of U.S. service parts shipments fell 5.9 percent from a year ago, and has been reduced 46.6 percent over the past six years.
In FY17 more than 150 U.S Honda and Acura dealers received a Honda Environmental Award and combined for an annual reduction of 19,000 tons of CO2

The unadjusted fleet-average fuel economy of Honda and Acura automobiles sold in the U.S.iii was 36.9 mpg in model year 2016 (MY16), outpacing the automobile industry average of 32.5 mpg by 4.4 mpg, or 13.5 percent.

The unadjusted fleet average CO2 emissions of the company’s U.S. automobile fleetiv is 11.7 percent below (better than) the industry average.
The fleet-average fuel economy of Honda motorcyclesv is up 46.8 percent from the MY2000 baseline.

Honda recycled 9,181 nickel-metal hydride batteries in FY2017, helping to reduce the need to mine these rare-earth metals.

Honda increased its e-waste, warranty and overstock parts diverted from landfill by 12 percent from FY2016, reaching its highest total since the company started the program.

Additional information on Honda’s environmental performance outside of North America can be found in Honda Motor Company’s Sustainability Report.

Honda’s Environmental Commitment
Based on its vision of “Blue Skies for our Children,” Honda is working to advance technologies that address society’s environmental and energy concerns. The company’s “Green Path” approach seeks to reduce or eliminate the use of substances of concern (SOCs) and scarce natural resources in the design of its vehicles, significantly reduce the CO2 intensity and water use of its manufacturing operations, continue to decrease CO2 emissions from the transportation of vehicles from its plants to dealers, and expand the involvement of U.S. Honda and Acura dealers as well as powersports, power equipment and marine dealers in its “Green Dealer” program.

These activities reinforce Honda’s goal to voluntarily reduce its total corporate CO2 emissions by 50 percent by the year 2050, compared to 2000 levels. In 2006, Honda was the first auto company to voluntarily and publicly commit to global reductions in its CO2 emissions. 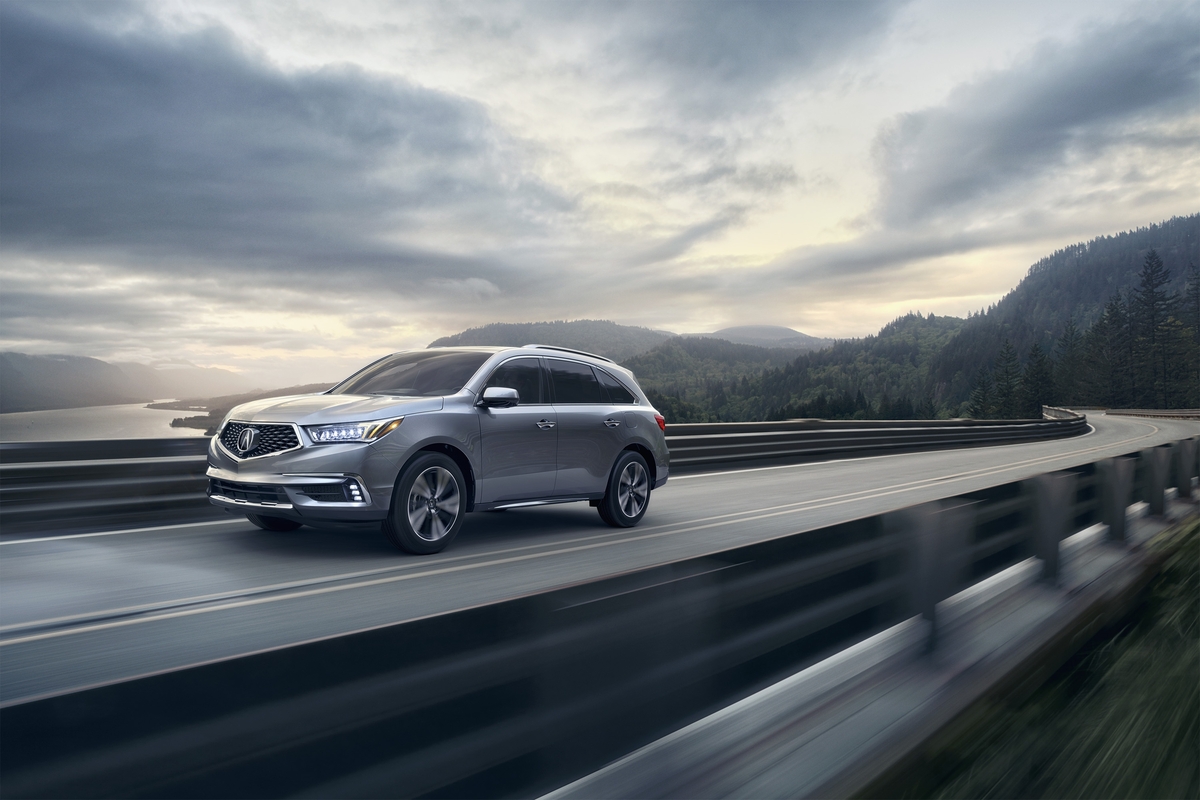 The powerful and sophisticated 2018 Acura MDX luxury SUV begins arriving at Acura dealerships tomorrow with a faster, more capable and modern user interface, vivid new colors and a Manufacturer’s Suggested Retail Price (MSRP)1 starting at $44,200, just $150 more than the outgoing model. The Acura MDX is the best-selling three-row luxury SUV of all time3 and has been recognized by Edmunds.com as the “Most Wanted Luxury Midsize SUV” (2017) and as “Best Luxury Three-Row SUV for the Money” (2017) by U.S. News & World Report.

For 2018, the Acura MDX features a redesigned dual-screen user interface(ODMD 2.0) with more intuitive menus and command structures complemented by a new 7-inch capacitive touchscreen (previously resistive type) with a 30-percent faster response time. It includes support for Apple CarPlay™, which seamlessly integrates compatible iPhones in the car, allowing users to get directions optimized for traffic, make calls, send and receive messages, and listen to music. It also supports Android Auto™ compatibility – putting some of the most useful Android phone apps on the MDX’s display.

The 2018 Acura MDX Sport Hybrid Super Handling-All Wheel Drive™ (SH-AWD®) model receives the same updates as the conventional MDX and will go on sale this winter. The MDX Sport Hybrid is the newest model in Acura’s lineup to utilize its revolutionary three-motor Sport Hybrid powertrain with electric torque vectoring, joining the NSX supercar and RLX Sport Hybrid as the third member of the Acura family to benefit from this proprietary technology. 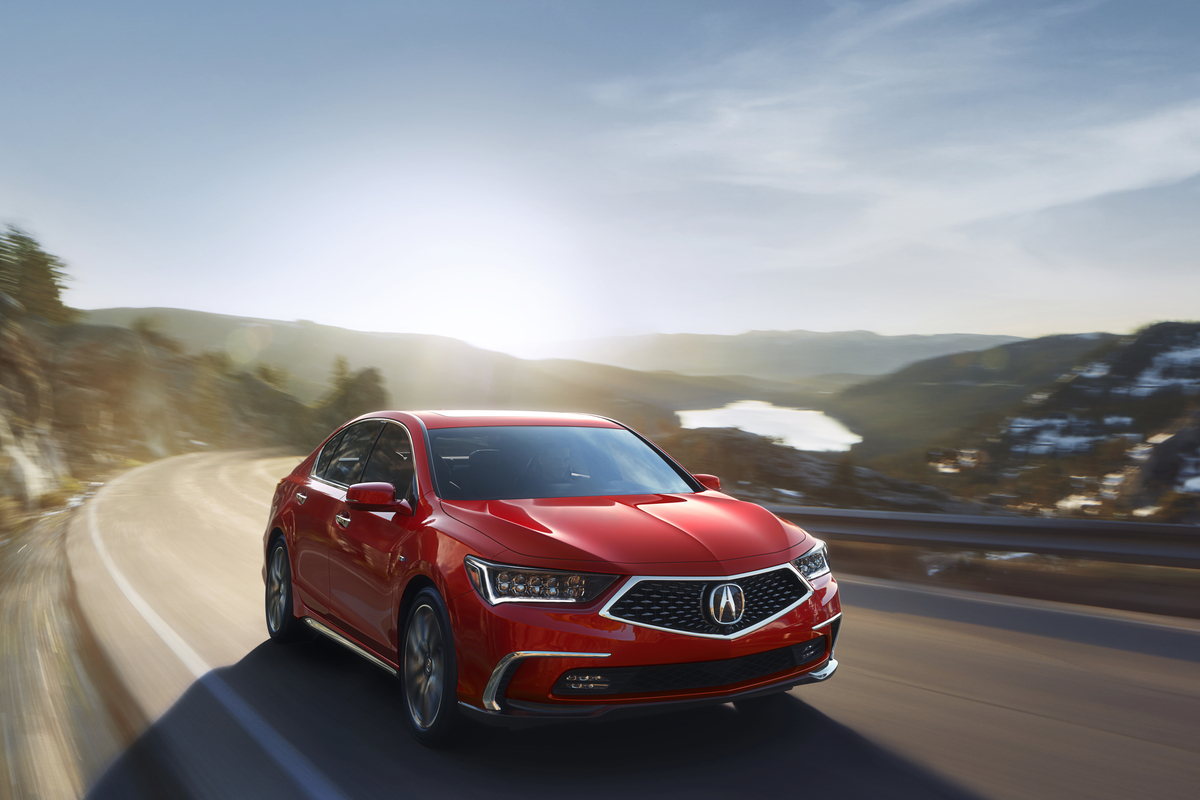 The 2018 Acura RLX is the most sophisticated and best performing Acura sedan ever, with Sport Hybrid Super-Handling All-Wheel Drive™ (Sport Hybrid SH-AWD™) technology, shared with the NSX supercar, that creates a powerful and precise driving experience unmatched in the segment. Acura has simplified the RLX trim structure to make the brand’s innovative Sport Hybrid technology more desirable and accessible streamlining the offering to two well-equipped variants. The new 2018 Acura RLX will go on sale in November.

The 310-horsepower RLX with Precision All-Wheel Steer™ is now mated to a new 10-speed Automatic Transmission (10AT) delivering a more refined driving experience, as well as improved acceleration and passing times.

The 2018 RLX features the unique AcuraWatch™ suite of technologies, as standard equipment, and has been enhanced with the addition of Traffic Jam Assist, a first for Acura. Working in conjunction with Adaptive Cruise Control with Low Speed Follow, Traffic Jam Assist helps reduce driver stress in highly congested traffic situations by helping keep the vehicle in its lane and a set interval behind a car detected ahead.

The 2018 Acura RLX is complimented by three new exterior colors including two premium paint offerings – Brilliant Red Metallic and Majestic Black Pearl. Inside, the 2018 Acura RLX receives upgraded materials and touchpoints including a completely redesigned seat featuring high-contrast piping and stitching, as well as a new Espresso interior option, which adds sophistication to an interior with class-leading space and comfort.

The 2018 Acura RLX will be featured at multiple events throughout Monterey Automotive Week including the Carmel-By-The Sea Concours on the Avenue on Tuesday, August 15 and The Quail, A Motorsports Gathering, on Friday, August 18.