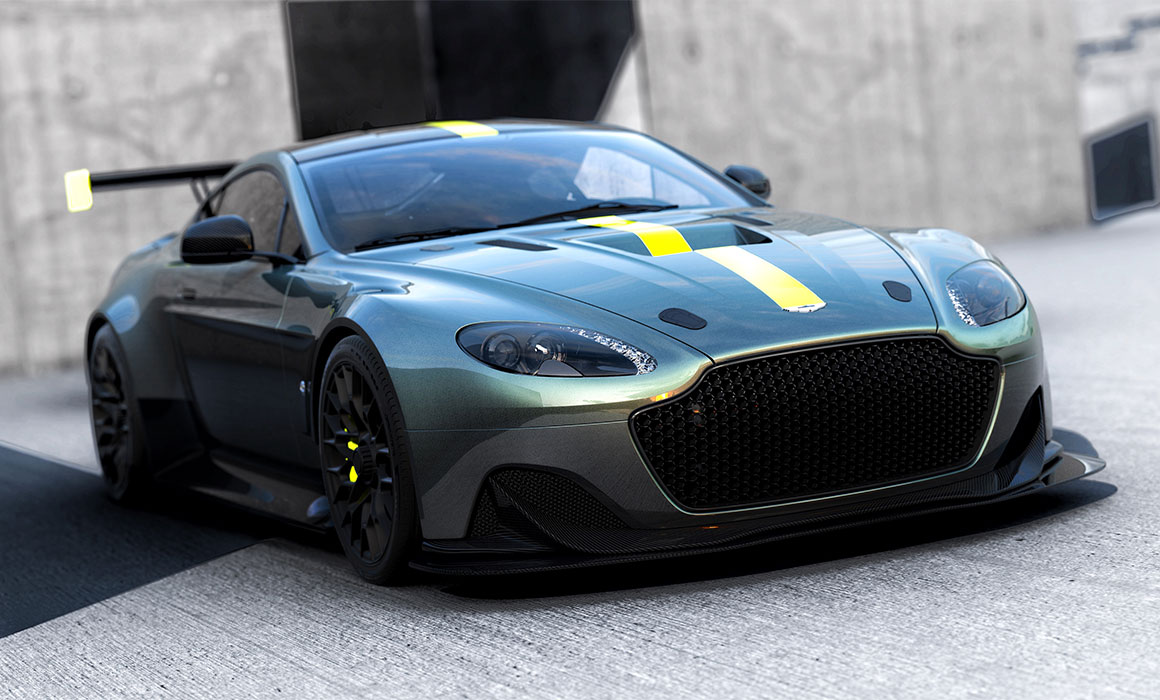 Aston Martin has chosen the 2017 Geneva Motor Show to launch AMR – an exciting new brand that brings a new dimension of race inspired dynamism and performance.

The AMR brand follows in the wheeltracks of successive iconic Aston Martin road cars which boasted top-level racing pedigree. In the mid-1930s the success of Aston Martin’s Team Cars in the Ulster TT road race led the marque to build further examples of the lightweight two-seater for sale to the public. In 1951, Sir David Brown introduced uprated and highly desirable ‘Vantage’ specification models, and steered the marque to an historic outright win at Le Mans with the iconic DBR1 in 1959.

Two AMR concepts have been unveiled in Geneva: The Rapide AMR and Vantage AMR Pro. The Rapide represents the first tier of AMR, enhancing the four-door sports car with a comprehensive suite of power, chassis and styling upgrades, plus a spectacular new interior treatment. The Vantage AMR Pro – heavily influenced by Aston Martin Racing’s WEC winning V8 Vantage GTE – is the pinnacle; an uncompromising demonstration of AMR’s ‘Track to Tarmac’ philosophy whereby race technology is transferred to road cars.

Underlining Aston Martin’s commitment to its new high-performance brand, AMR’s European development and brand centre will be based at Aston Martin’s state-of-the-art Nürburgring Test Centre, which is situated within sight of the legendary Nürburgring Nordschleife race track.

Marek Reichman, Aston Martin EVP and Chief Creative Officer, says that the AMR brand was a logical next step after the ’sold-out’ success of limited edition sporting versions like the Vantage GT8 and Vantage GT12: “Each time we have pushed the boundaries and done something extreme, the customers have loved the cars. AMR enables us to take Aston Martin into a new dimension. One where we can turn-up the sporting DNA present in all of our models and make a true statement. An AMR model will have an instantly recognisable design language. One that accentuates and amplifies, together with the latest GT race car technology for the road. They will be special and rare cars that are credible, thrilling to drive and hugely desirable to own.”

Extensive use of carbon fibre detailing on the exterior provide the perfect finishing touches. The interior is equally breathtaking. Lightweight carbon fibre front seats, trimmed throughout in Dark Knight Alcantara with Lime Green accents and carbon fibre waterfall, centre console and door casings, ensure the Rapide AMR is a fabulous fusion of race car attitude with a luxurious crafted twist.

The Vantage AMR Pro is an extreme, track-only expression of performance and the ultimate iteration of the Vantage. Powered by a 507PS development of Aston Martin Racing’s GT4 race engine, the Vantage AMR Pro is the most powerful V8 Vantage ever. Race-spec adjustable suspension, competition engine and transmission mounts and new 19in x 9.5in front and 19in x 11.5in rear centre lock wheels shod with Michelin Pilot Cup 2 tyres, the Vantage AMR Pro promises inspirational handling precision and exceptional levels of grip and traction.

This race car performance is matched by authentic motorsport styling. Once again painted in Stirling Green with lime green accents, the Vantage AMR Pro not only takes its colour scheme from Aston Martin Racing’s V8 Vantage GTE racer, but uses the same bonnet and rear wing as the World Endurance Championship winner.

The racing theme continues inside, with extensive use of carbon fibre, lavish Dark Knight Alcantara upholstery with lime green accents and a custom roll cage designed by Q by Aston Martin. The result is a Vantage that looks as spectacular as it drives.

Aston Martin’s President and Chief Executive Officer, Dr. Andy Palmer, was quick to confirm that both the Rapide AMR and Vantage AMR Pro concepts are set for production: “As passionate enthusiasts of Aston Martin’s competition pedigree, AMR is something we have wanted to bring to fruition for some time. Cars such as the Vantage GT8 and Vantage GT12 confirmed that our customers love raw, race-bred models, but we also knew there was an opportunity to create cars that offer a sharper performance focus but stop short of those truly hardcore, special series models. With the AMR brand we have the perfect platform to deliver both.

As proof of that intent I’m incredibly excited to announce that we will be putting both the Vantage AMR Pro and Rapide AMR into production: the Vantage in an extremely limited series of no more than 7 cars; the Rapide as a run of only 210 cars. They are the start of something very exciting – a programme that will eventually see an AMR version of every model in the Aston Martin range”.