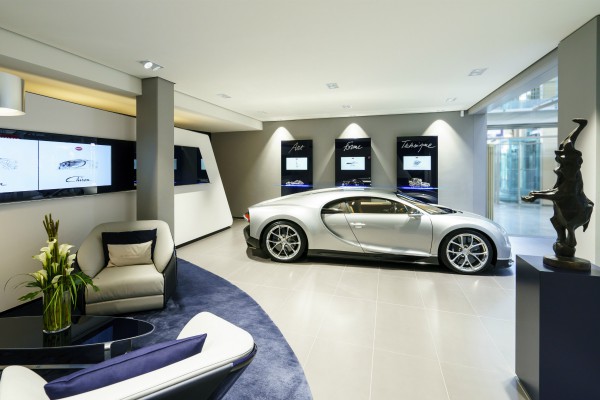 The French super sports car brand Bugatti now has an exclusive outlet in Hamburg. Together with its sales partner, Kamps in Hamburg GmbH & Co. KG, Bugatti inaugurated an entirely redesigned showroom this week. The Bugatti brand world has floor space of almost 100 square metres and is located near Hamburg airport. The latest product of the luxury brand from Molsheim, the 1500 PS, 420 km/h Bugatti Chiron1, now has an appropriate home in the north of Germany. Hamburg is Bugatti’s fourth dealership in Germany with the new showroom design and its 12th in Europe. Bugatti has a total of 34 dealerships in 17 countries, four of which are located in Germany.

“The opening of the new Bugatti showroom in Hamburg completes the exclusive presentation of our dealerships in Germany. I am very happy about this new facility,” says Dr. Stefan Brungs, Member of the Board of Management of Bugatti Automobiles S.A.S. responsible for Sales, Marketing and Customer Service. “Showrooms appropriate for the brand are reflected in sales performance. Germany has overtaken Great Britain and Switzerland and is now the number one market in Europe,” Brungs adds. In total, 45 orders for the Chiron have been taken in Germany, representing 40 percent of all sales in Europe.

“Bugatti Hamburg has also been very successful with sales of the Chiron. I would like to thank our long-standing partner, Kamps in Hamburg, for the team’s excellent work and considerable personal dedication.” Since the launch of the super sports car, Hamburg has taken 10 orders for the Chiron.

The Kamps Group has been successful in the automobile business for more than 60 years and has become an expert in super sports cars and luxury vehicles. Kamps in Hamburg GmbH & Co. KG, a company which is a member of this group, has been an official dealer partner of Bugatti since 2009.

“The extremely positive cooperation with Bugatti over the past few years and the results achieved have reinforced our decision to open an exclusive showroom in Hamburg for the super sports cars from Molsheim,” says Ronald Ludwig, Managing Director of Bugatti Hamburg. “It is a great honour for us to be able to present the world of this extraordinary brand with its history of more than 100 years to our demanding customers at a new address.”

The new showroom in Hamburg gives customers and guests an impression of the Bugatti brand values of “Art, Forme, Technique” and the flair of the company’s headquarters in Molsheim. There is a heritage section devoted to the Bugatti brand values. Three wallmounted steles each express one of these values. Each stele has a monitor for showing films and animations that give an impressive presentation of the respective brand value.

The lounge area is equipped with furniture from the Bugatti Home Collection designed especially for the brand’s new showrooms. The organically shaped armchairs are made from the finest leather and blue carbon fibre, high-quality materials with complex processing that are also used for the production of a Bugatti super sports car. The sides are decorated by the EB logo.

A curving white brand wall sets the stage for the star of any Bugatti showroom – the Chiron, the world’s most powerful, fastest, most luxurious and most exclusive production super sports car. 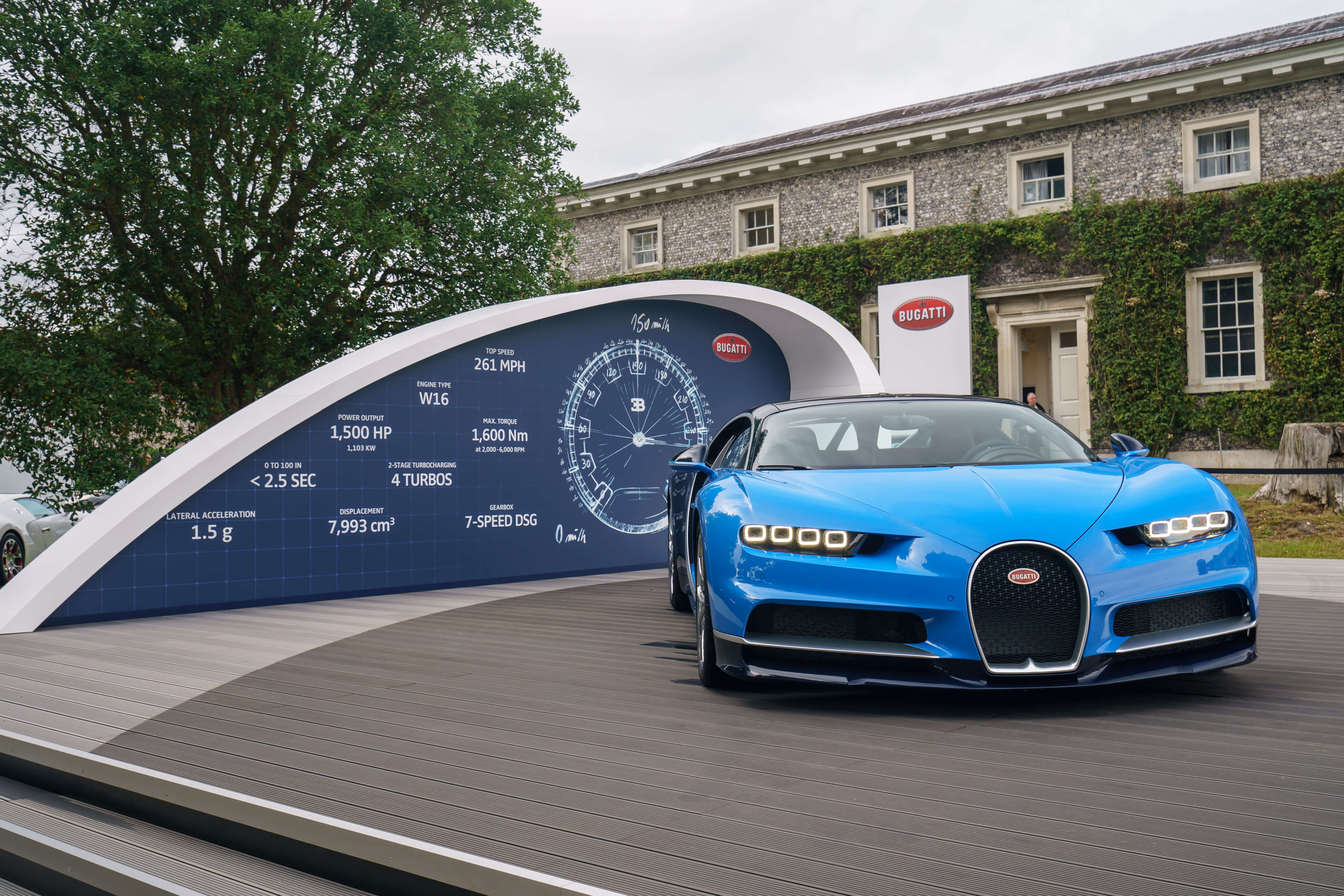 With its appearance at this year’s Goodwood Festival of Speed in the South of England, Bugatti is more than doing justice to its status as the manufacturer of the ultimate super sports car. With eight vehicles from its recent past, the French luxury brand is bringing as many as 9,404 horsepower onto the lawn at Goodwood House near Chichester (West Sussex) this weekend. The cars include six Veyron 16.4, one of which is a pre-series car from 2005, a fantastic Veyron 16.4 Pur Sang from 2007 (both 1001 HP), a 1,200 HP Super Sport from the World Record Edition (2010) and the 1,200 HP Grand Sport Vitesse, which took the world speed record for production roadsters in 2013. However the crowning highlight of the presentation is the new 1,500 HP Chiron1.

Two examples of the world’s most powerful, fastest, most exclusive and most luxurious production super sports car are on show at Goodwood, the first customer vehicle for the United Kingdom and a Chiron which has travelled to Goodwood direct from Bugatti’s headquarters in Molsheim to thrill visitors on the legendary hill climb – piloted by British racing driver and Le Mans winner Andy Wallace. The Goodwood Festival of Speed is being held from 29 June to 2 July 2017. 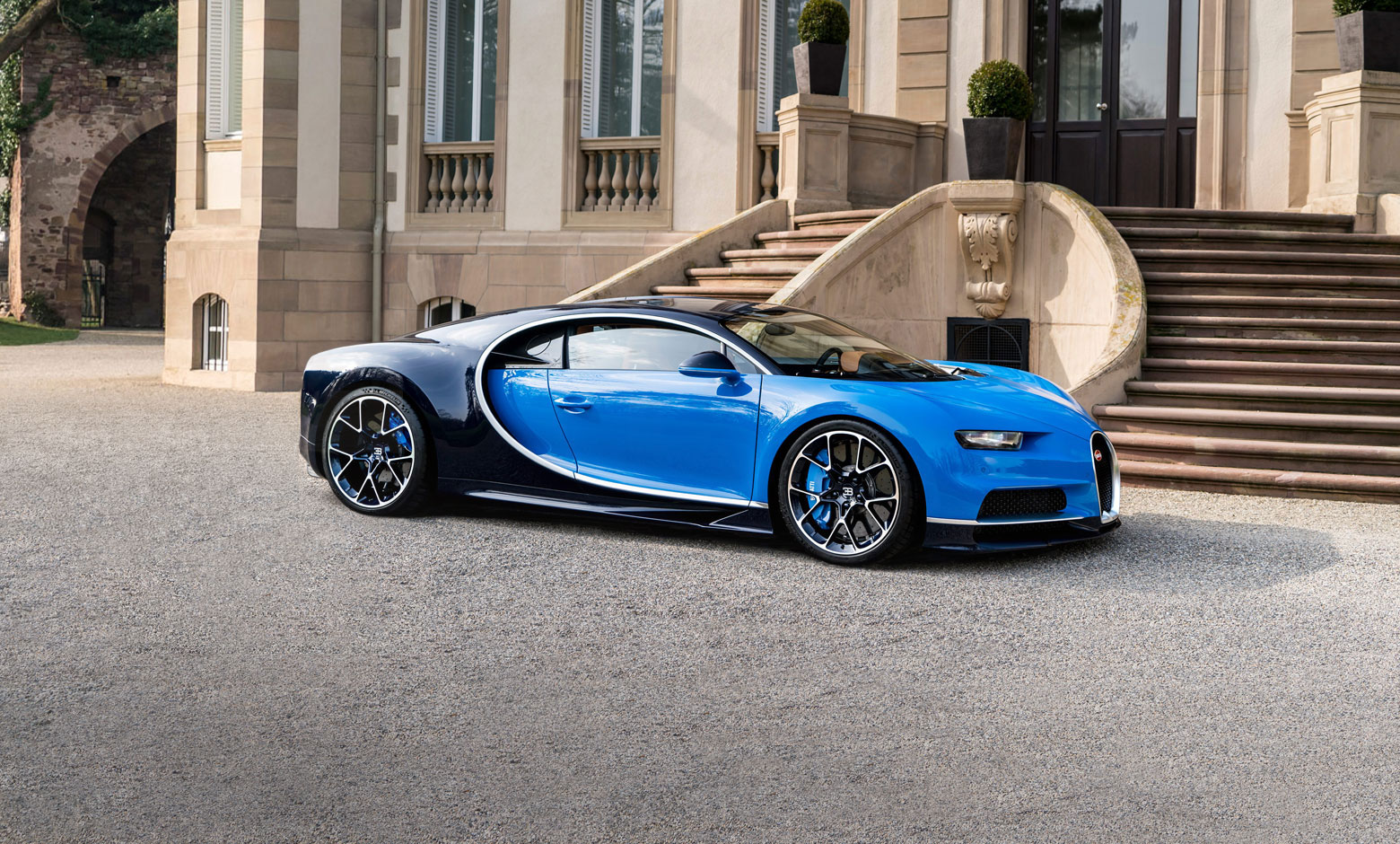 “It is part of human nature to cross boundaries and set new records – to run 100 m faster than ever before, to fly even further into space and to enter new realms. This striving is also our driving force at Bugatti. The Chiron is the result of our efforts to make the best even better. Bugatti has tested the limits of physics. There is no area where we have not achieved significant improvements.” – Wolfgang Dürheimer, President Bugatti Automobiles S.A.S.

The Chiron is the most modern interpretation of Bugatti’s brand DNA and embodies our new design language. The styling accentuates the performance aspect of the super sports car. The motto adopted by the Bugatti designers for the Chiron was “Form follows Performance”. Inspired through Bugatti Type 57SC Atlantic the new design language is characterised by extremely generous surfaces, which are demarcated by pronounced lines in the case of the Chiron. Thereby most of these elements have a technical background and have been designed to fully accentuate the growing performance requirements of the Chiron.

In order to achieve a 25 percent increase in performance compared to its predecessor, almost every single part of the engine was looked at and newly developed. This feat of engineering resulted in the W16 engine of the Bugatti Chiron being able to develop an unbelievable 1,103 kW (1,500 bps) from its 8 litres of displacement. The engine reaches its maximum torque of 1,600 Nm thanks to the turbocharger which Bugatti actually even developed itself. The 4 turbochargers are now double-powered and already guarantee maximum torque at 2,000 rpm, and the torque is maintained at this level all the way up to 6,000 rpm. The result is unbelievable acceleration which only comes to an end in the twilight zone somewhere beyond the 400 km/h mark.

The Chiron. Each single Bugatti is a one of a kind – as individual as its owners. The level of individuality that can be achieved is subject to very few limitations. Find your inspiration and experience a small selection of the countless possibilities available.

The Bugatti Chiron. Maximum driving performance, breath-taking beauty and fascinating technology combined to create an incomparable driving experience. Ladies and Gentlemen turn up your volume and start your engines.

The Bugatti Stratos is a slick design by France’s Bruno Delussu, who was inspired by classic cars such as the Bugatti Type 57, Alfa Romeo 6C 2500 Mille Miglia and locomotive designs by Raymond Loewy. Delussu wasn’t so interested in the technical aspects of those vehicles, however. He designed the Stratos to be a purely fantastical car that leans on its looks.

And lean on its looks it can. The end result, as you can see, is pretty impressive, affecting a retro air that’s still undoubtedly futuristic.

French graphic designer Bruno Delusso didn’t want to be bothered with the engineering and mechanical issues that plague the average concept car – he just wanted to create something stunning. So by throwing production feasibility, drivetrain components and caution to the wind, he succeeded.

Inspired by the Bugatti Type 57, Alfa Romeo 6C 2500 Mille Miglia and Raymond Loewy’s locomotive designs, Delusso rendered up this: the Bugatti Stratos. Aside from the rear window and grille, it’s difficult to peg the Stratos as anything more than futuristic, Photoshop-enhanced navel-gazing, but the design speaks for itself

Last year’s Pebble Beach Concours d’ Elegance in California was the setting for the very beginning world demonstration of the freshly Bugatti Veyron 16.4 Grand Sport. The reaction was super positive and today production of this roadster – restricted to 150 units – is to begin at Molsheim. Concurrently, the media and clients are calling for their first test drives.

The primary challenge in development the new Bugatti Veyron 16.4 Grand Sport with its removable roof resulted from the incomparable structure of the fixed-roof Bugatti Veyron. An optimal combination of rigidity and lightweight engineering secures the monocoque passenger cell of the original model is highly strong, while considering an absolute minimal. As the roof is an built-in part of the vehicle’s body structure, removing it meant the load paths had to be completely redesigned to maintain the vehicle’s rigidity and crash safety, and to extend extra security from side impacts and rolling.

As a final result, the monocoque structure back-number reinforced round the side skirts and the transmission tunnel. The B-pillars have been cross-stiffened using a carbon fibre support, and a central carbon plate has been positioned below the transmission tunnel to guarantee the vehicle suffers from lower torsional flexing than any other roadster.

The doors of the new Bugatti Veyron 16.4 Grand Sport are constituted of carbon fibre, and house an integrated longitudinal beam. In the event of an accident, this transfers the load from the A to the B-pillar, thereby dispelling impact energy. Moreover, the 2 redesigned air intakes for the 16-cylinder mid-engine now feature 10-centimetre wide carbon-fibre elements to provide security in the consequence of a roll.

Along with moisture-resistant, backstitched leather, a range of new equipment features has been expanded the interior, including a reversing camera with 2.7-inch monitor integrated in the rear-view-mirror, and the “Puccini” sound system with digital signal processor.

When the roof is closed, the Bugatti Veyron 16.4 Grand Sport can reach 407 km/h, while speeds of up to 360 km/h are possible with the roof off. Should it rain, an innovative soft-top roof, like an umbrella, stored in the luggage compartment, can be opened up at any time. With this soft top in place, the car can travel at up to 160 km/h.
More than just an open Veyron

“When I had the chance to test-drive the new Grand Sport for the first time myself, I was filled with excitement”, said Pierre Henri Raphanel, Bugatti’s Pilot official, “as soon I shifted into second gear, I cognized this was a entirely another car. I could immediately feel the difference. Even with the roof still on, in the tips of my fingers and at the base of my spine everything was more present, more intimate. More precise with less understeer, almost as if you had taken away some filters from the suspension and the steering.” The former Le Mans winner has probably driven more kilometres in a Veyron than anyone else, presenting the car to a lot clients and the press. Taking off the roof “the excitement comes directly from the engine – giving you the feeling that you had a horsepower factory just thirty centimetres behind your head, trying to suck you up and swallow you,” he raves.

Assembled by hand at the company’s headquarters in Molsheim, Alsace, the Grand Sport will be delivered from July 2009 onwards at a price of 1.4 million euros (excluding taxes and transportation). Just 150 units will be made, with the first 50 of these going exclusively to registered Bugatti customers. So far 30 Grand Sports have been ordered. The Chassis Number one auctioned at the Pebble Beach Auction by Gooding and Company last summer and sold for 3.19 million Dollar. The additional revenues of 900.000 Dollar were donated by Bugatti to the Pebble Beach Company Foundation Charity.