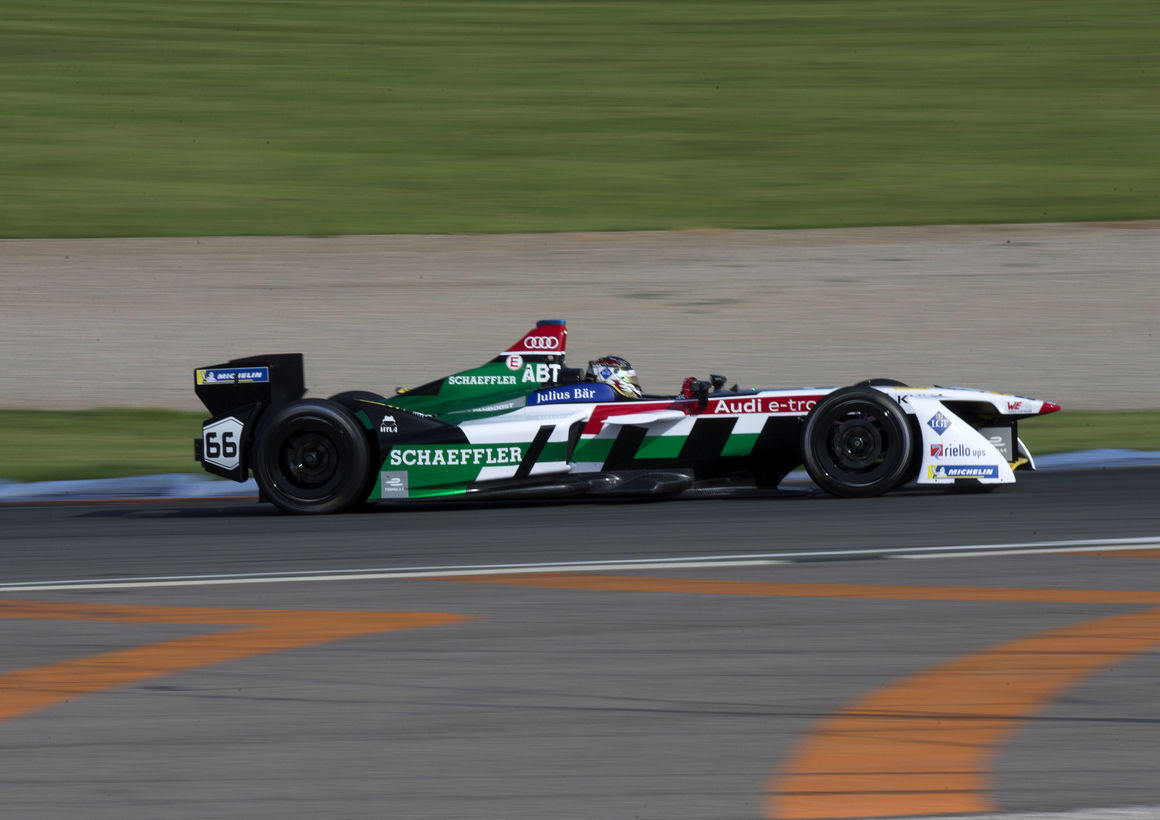 The new Audi e-tron FE04 has left a strong impression at the official pre-season testing of the Formula E electric racing series at Valencia (Spain). Team Audi Sport ABT Schaeffler from Monday to Thursday completed the largest number of test kilometers of all ten teams. The lap times of the first all-electric Audi race car were promising as well.

New Audi factory driver Daniel Abt (Germany) and title defender Lucas di Grassi (Brazil) reeled off an extensive test program with the four race cars of Team Audi Sport ABT Schaeffler in high summer temperatures of up to 30 degrees centigrade in the shade. The program was focused on race simulations and optimization of the energy management of the new motor-generator unit (MGU) which now only has one forward gear.

In spite of the heat, the four Audi e-tron FE04 ran with complete reliability on all three days, so enabling Daniel Abt and Lucas di Grassi to reel off a total of 474 laps on the three-kilometer Circuit Ricardo Tomo near Valencia, which equates to a distance of 1,466 kilometers – equalling the race distance of a whole Formula E season. The two Audi drivers were regularly part of the top group, although the absolute best times are only of limited significance: testing was only permitted with the full qualifying power of 200 kW twice per day and per car. In addition, the track configuration was modified by a second chicane on the start-finish straight during the test.

“Daniel and Lucas felt comfortable in the car right from the beginning and confirmed to me that we’ve done good development work and made a big step forwards with the new powertrain,” said Team Principal Allan McNish, assessing the tests. “Even though we’re only going to see where we really stand at the season opener in Hong Kong and still have a lot of work to do until then, we can be very happy with the test in Valencia. The Audi e-tron FE04 is reliable and fast. Now we need to continue to optimize energy management and the software on the test bench and in the simulator.”

“It’s been a positive test,” reigning Formula E Champion Lucas di Grassi agreed. “I believe that our new car is very competitive. Audi, ABT and Schaeffler have done a good job. We made optimal use of the three test days in order to put ourselves in a good position for the season opener in Hong Kong. The top times were very close together. I’m expecting a thrilling season.”

“The test at Valencia went smoothly,” said Daniel Abt. “There was a lot to learn with the new software and other things. We made good progress on these three days, especially on the last day. The car is running superbly and is fast. I can hardly wait to tackle my first two races as an Audi factory driver in Hong Kong.”

From now on until the season opens in Hong Kong on December 2 and 3 testing is prohibited in Formula E. The four Audi e-tron FE04 cars will be completely dismantled and reassembled once more at the team’s base in Kempten. In mid-November, they will be flown from England to Hong Kong. 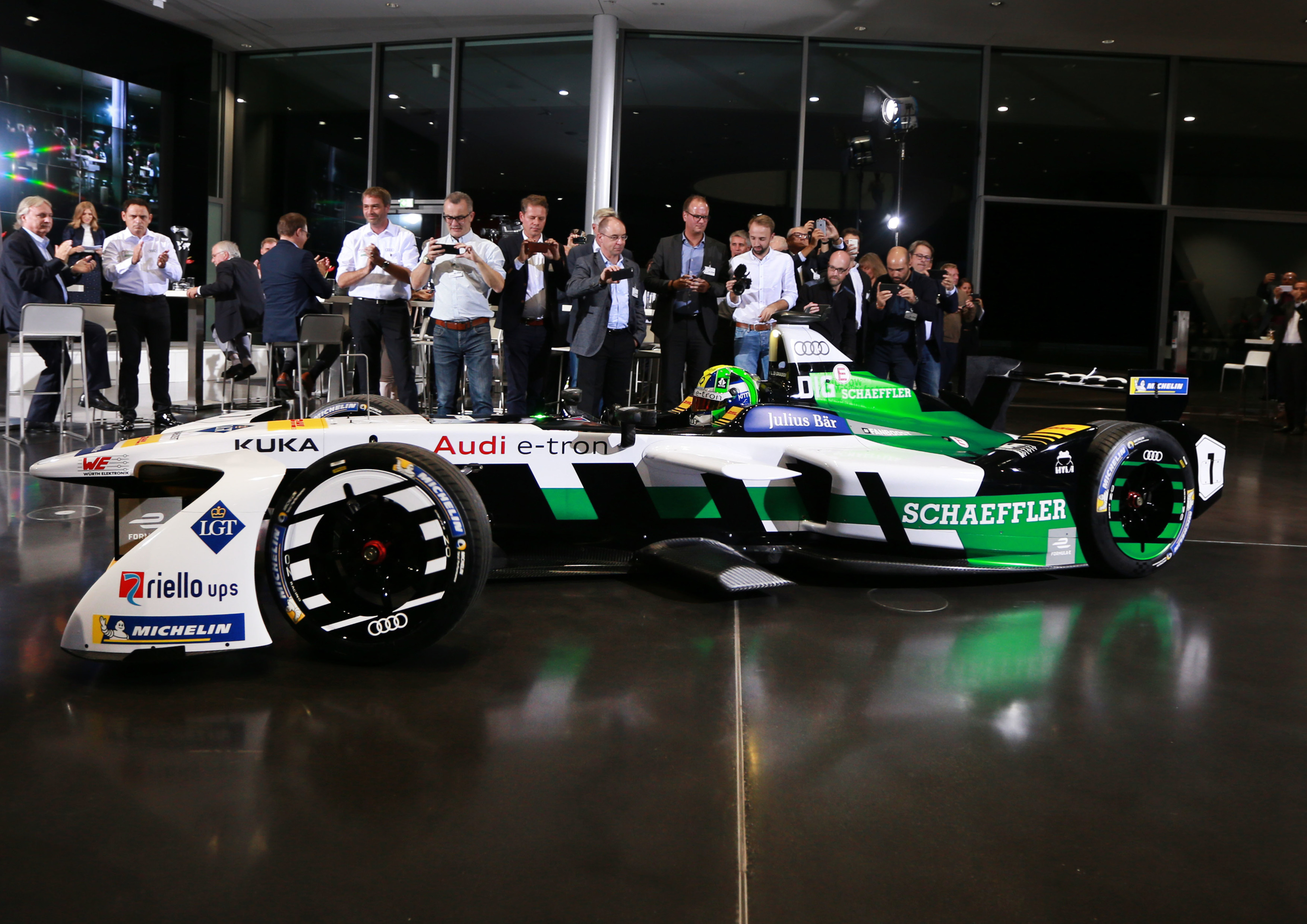 Audi presented the Group’s first all-electric race car in Neuburg on Wednesday night. The Audi e-tron FE04 mirrors the company’s transformation from a classic automobile manufacturer to a forward-thinking mobility provider on the race track.

“After nearly 40 years of being successfully active in motorsport on the highest level, Audi now becomes the first German automobile manufacturer to compete in Formula E in order to test and advance the development of new technologies for production,” says Peter Mertens, Member of the Board of Management, Technical Development, AUDI AG. “Following quattro, TFSI, TDI, hybrid drive and many other innovations, our first single-seater race car is a portent of our product offensive in the field of electric mobility that we are ringing in with the Audi e-tron in 2018.” At the IAA, Audi announced having more than 20 electrified models in its range even before 2025 including Plug-in-hybrids and fully electric cars.

In Formula E, the teams and manufacturers are allowed to develop the powertrain consisting of the motor, transmission, parts of the suspension and the respective software. The combination of the motor and transmission is the centerpiece of the Audi e-tron FE04. The engineers primarily focus on designing the motor-generator unit for ever greater efficiency. To transmit the power to the wheels, Team Audi Sport ABT Schaeffler will be using a high-efficiency transmission with only one gear in the 2017/2018 season.

“Together with our technology partner Schaeffler, we have developed a completely new powertrain,” says Head of Audi Motorsport Dieter Gass. “You can immediately tell this by looking at the new carbon housing of the powertrain. The car also sounds different because we’re pursuing new avenues in technology.”

A progressive new livery featuring white, metallic green and black as the basic colors visually distinguishes the Audi e-tron FE04 at first glance clearly from the car in which Lucas di Grassi won the Formula E championship title in July. For the first time in his career, the 33-year-old Brazilian is entering a new season in car number “1” of the title defender and on the occasion of the world premiere in Neuburg he did not let the opportunity pass by of driving the softly whirring new electric race car onto the stage.