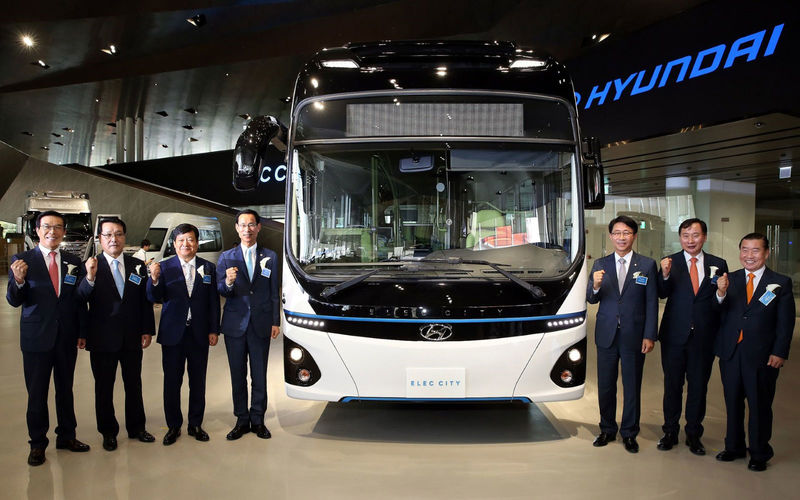 Hyundai Motor recently unveiled its new all-electric-powered bus, which it plans to put into mass production next year. But does it represent the future of public transportation?

As part of its mission to make eco-friendly vehicle technology accessible for everyone, Hyundai Motor has unveiled an all-electric-powered bus, dubbed ‘Elec City’, that is no mere prototype – the company intends to put it into mass production in 2018. Yeongduck Tak, Senior Vice President and Head of Commercial Vehicle R&D Division, revealed it was very much a part of Hyundai’s strategy moving forward when he described it as providing “a glimpse into the future of public transportation”.

Scheduled for launch next year, Elec City has a range of up to 290 km (180 miles), while its 256 kWh lithium-ion polymer battery can be fully charged in just over an hour, making it more than ready to service a city bus route from morning through to night. It certainly opens up a new route on Hyundai’s environmental and intelligent roadmap, following in the footsteps of the hydrogen-powered ix35 Fuel Cell and the IONIQ’s hybrid, plug-in hybrid and all-electric powertrains. But are electric buses really the future?

They are already an established part of China’s present. In 2015, over 98 percent of the world’s 173,000 electric buses were driven on Chinese roads. This huge take-up was attributed to a combination of urban air quality targets and government subsidies, as well as the availability of financing options for transport operators.

Europe starts to electrify
As that statistic suggests, Europe has been much slower to adopt this new technology. However, according to a report by the EU’s ZeEUS (Zero Emission Urban Bus System) project, by the end of 2016 the continent had over 1,300 electric buses in service or on order.

The key driver of growth is of course the role that zero-emissions transportation will play in tackling public health, with the EU having set a goal of reducing its greenhouse gas emissions by at least 80 percent by 2050. The huge reduction is borne of necessity: a European Environmental Agency report, ‘Air Quality Europe’, showed that in 2013 every major European city besides from Dublin in the Republic of Ireland exceeded the EU’s NOx (nitrogen dioxide) target.

Among those identified in the report was London, which suffered worse pollution than Beijing in January this year, leading mayor Sadiq Khan to warn that the city faced a serious air pollution crisis. As part of the response, six months later Kahn and Transport for London announced it would introduce three more electric-only bus routes – bringing the total number of these routes in the capital to six – and purchase a further 56 electric buses to bring the total number on London’s roads to over 170.

With a 2016 study by UITP (Union International des Transports Public) showing that almost half of the EU’s buses were still operating to Euro 3 emissions standard or older – well below the Euro 6 standard that all buses sold post-January 2017 must meet – public transport operators across the continent need to renew their fleets urgently. According to the ZeEUS report, 19 operators and authorities, covering about 25 European cities, have published a strategy for the introduction of electric buses by 2020. By then, they will have over 2,500 electric buses, representing 6 per cent of their total fleet of 40,000.

Another 13 public transport operators and authorities in a further 18 European cities have a strategy with a 2025 target date. By this time they aim to have more than 6,100 electric buses in service, representing 43 per cent of their total fleet of 14,000.

The world’s going electric
Beyond Europe and China, the rest of the world is gradually turning to zero-emission public transportation too. Last month, Los Angeles’ Metropolitan Transportation Authority unveiled plans to spend $138m on electric buses, with the goal of creating an emission-free fleet by 2030. July also saw Nitin Gadkari, India’s minister for road transport, urge a meeting of over 3,000 bus operators to opt for electric-powered vehicles over the standard diesel option.

Looking at the bigger picture, a senior World Bank official has reasoned that with the global transport sector responsible for 23 percent of energy-related greenhouse gas emissions, there will be no significant headway made on tackling climate change without “greener, more sustainable mobility”. Jose Luis Irigoyen, the bank’s Senior Director for the Transport and Information and Communications Technologies Global Practice, said that more than 70 per cent of the Nationally Determined Contributions that countries proposed to implement as part of the 2015 Paris Agreement include transport commitments.

Analysis international market research firm TechSci Research has suggested that the global market for electric buses is set to grow by 17 percent every year to 2021. If you haven’t caught a ride on one in your town or city to date, the signs are that it won’t be long before they become hard to miss.