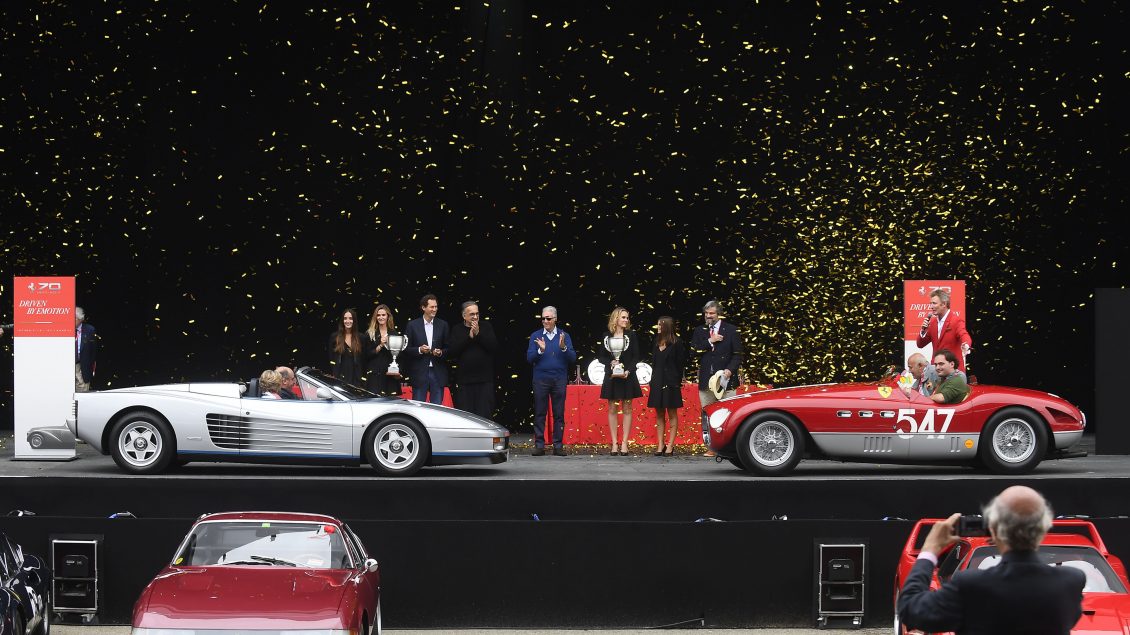 The Concours d’Elegance prize-giving ceremony brought Ferrari’s two days of 70th Anniversary celebrations at the Fiorano circuit to a stylish conclusion: a very special weekend that saw more than 4,000 clients and almost a thousand cars from across the globe converge on the track where every Ferrari gets its maiden outing. It was the perfect culmination too of a year that has already featured a whole programme of celebratory events spanning 60 different nations and continuing until the end of 2017.

Today, however, clients’ and enthusiasts’ eyes alike were all on the 120 historic cars, some incredibly rare and valuable, competing for the title of Best of Show in the Racing Car and Road Car categories at the Concours d’Elegance. Divided into 20 different classes and displayed on the grass at Fiorano, the fleet presented judges with a very difficult task. Nonetheless, the jury finally agreed to award the two titles to the 1953 340 MM Spider Vignale and the 1986 Testarossa Spider.

The 340 MM Spider Vignale has a spectacular sporting history. This particular example competed in several races and its greatest coup was taking victory in the 1953 Mille Miglia in the hands of Giannino Marzotto and Marco Crosara. The 1986 Testarossa Spider, on the other hand, is a unique car – the only spider version of this model ever built. In fact, it was commissioned especially to celebrate Gianni Agnelli’s 20th anniversary as Fiat chairman and he owned it until 1991.

One of the most memorable moments of the Fiorano weekend was the auction, the start of which was marked very fittingly by a flyover by the Eurofighter Typhoons of the Italian Airforce’s 4th Wing from Grosseto, which have a deep connection to Ferrari as their fuselages too sport the Prancing Horse insignia, first used by the heroic Italian fighter ace Francesco Baracca. The auction saw collectors vying for the 38 enormously valuable Maranello cars, which included an exclusive LaFerrari Aperta sold for 8.3 million euro. That sum will be donated in its entirety to Save the Children to provide education to thousands of the most disadvantaged children across Africa, Asia, Europe and South America. In all, the cars that went under the hammer fetched a total of 63 million euro, a record figure for a single-make auction.

Another unforgettable high point of the weekend was Saturday evening’s spectacular Rosso 70 show which commenced with a welcome speech by Chairman Sergio Marchionne before brilliantly illustrating Enzo Ferrari’s unique vision and dreams and how they crystallised into everything that Ferrari represents in the world today.