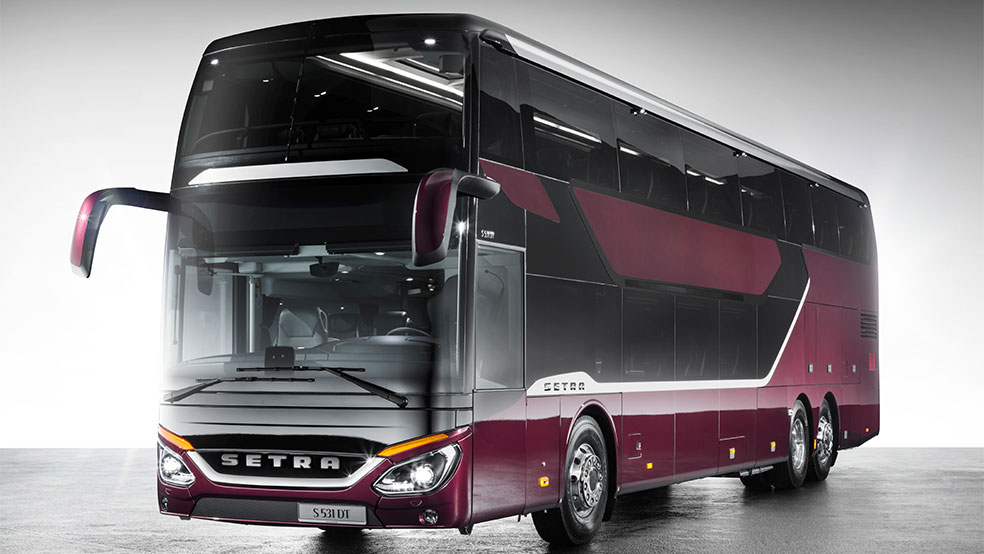 Maximum efficiency and variability, supreme comfort and the ultimate in safety: the new Setra S 531 DT double-decker bus of the TopClass 500 sets new standards in its class. With superlative aerodynamics, this impressive touring coach is all set to establish new fuel efficiency records in its segment. With its flexible lower deck, it covers the entire scope of applications in touring and regular services. The interior boasts an impressive standard of comfort. Finally, the use of Active Brake Assist 4 and Sideguard Assist on board the new double-decker bus will mark the world premiere for these assistance systems in the bus and coach segment. These systems further enhance the already high standard of safety. All this is cloaked in a fascinating design with its own distinct stamp.

The very highest safety as standard – courtesy of Daimler Group technology. The premium brand’s new double-decker comes as standard with long-life LED headlamps which are kind on the eyes. The emergency braking system Active Brake Assist 4 (ABA 4) is being introduced in the bus and coach sector for the first time ever on board the S 531 DT. In addition to the previously available functions – maximum full-stop braking in response to stationary objects and obstacles moving ahead of the vehicle – it now also incorporates pedestrian detection with automatic braking response. Another world premiere in the bus and coach segment is the use of Sideguard Assist on board the new double decker. This employs radar sensors to monitor the lane to the right of the bus along the vehicle’s entire length. When turning off and cornering, it warns the driver of pedestrians, cyclists and stationary obstacles in the turning path. Outside of built-up areas, it additionally serves as a lane-changing assistant.

The new double-decker bus is tailored for optimum aerodynamics from front to rear. At the front, windscreens with pronounced curvature and large edge radii allow the air to flow around the vehicle, while at the rear recesses and airflow breakaway edges guide the airflow in a controlled manner. The development engineers have attended to the most minute details: the windscreen wiper on the upper deck is vertical in its rest position, for example – a feature adopted from motorsport. These measures result in a drag coefficient of Cd = 0.35 – a new benchmark for this segment. The aerodynamics provide the basis for record-breaking fuel consumption, which drops by around seven to ten percent compared to the predecessor model, according to the type of use. Depending on the mileage covered, this adds up to savings of several thousand litres of fuel annually.

Variability: the new Setra is a bus to meet all needs

Holiday travels, long-distance regular services, stylish bistro buses, inter-city lines – the new Setra covers all conceivable types of use for a bus on this scale. The variable lower deck provides the basis for this versatility, together with the scope for individual appointments and seating which is typical of the brand. Thanks to a completely new construction, the platform on the ground floor on the right as seen in the direction of travel can be omitted if the customer so desires. This results in new options: wheelchair bays, installations for bistro buses, a demountable platform with pram area for inter-city lines or, with platform, the classic seating for touring purposes. The available diversity is also manifest in the cockpit: customers can choose between the elegantly functional cockpit from the Setra ComfortClass 500 and the luxurious cockpit from the TopClass 500.

With a bright interior, with plenty of light and a modern design, the interior of the new Setra makes a spacious impression. The stairs connecting the lower and upper deck catch the eye in particular. Glazed on the outside, they feature panelling consisting of translucent acrylic plastic on the inside. Evenly spaced two-tone steps with individual lighting, landings and continuous handrails give passengers a sense of security when going up and down the stairs. The washroom in a totally new design is also worthy of note. Its installations are arranged diagonally, making maximum use of the available space. The gleaming white upper areas of the furnishings and the pleasant LED lighting are reminiscent of a modern bathroom.

The Setra double-decker bus is “heaven-scent”

An optional fragrance dispensing system takes the already pleasant climate on board the new Setra to new heights. When the ignition is turned on and door one is opened, or when a door is left open, a fragrance generator automatically dispenses a discreet and unobtrusive yet highly pleasing scent. In this way, a fresh yet unobtrusive aura welcomes guests on board and encourages them to feel at their ease. The main components have been taken from the Mercedes-Benz S-Class. There are six fragrances to choose from, ranging from fresh and sporty to a heavier scent that reminds one of leather.

The new double-decker bus belongs to the Setra TopClass 500. Within the 500 model series, it is nevertheless in a class of its own, on account of its broad spectrum of applications and its diverse scope of equipment and variants. This is documented by its modern and distinct appearance. The Setra’s face with its dark front panel and silver brand lettering clearly originates from the TopClass 500. As a new feature, the two windscreens are seamlessly joined together and structured by an aluminium bar. On the side wall, the designers have adapted the brand’s hallmark “La Linea” aluminium strip, which now extends horizontally along the edge of the roof. The extensive glazing is highlighted by a counter-sweep at the level of the rear stairs, which adds a dynamic touch and features an aluminium surround. The panelling of the upper deck now appears to hover like an island on the glass. Underneath, an aluminium badge above the front wheel arch provides a break in the waistrail on the lower deck. Side fins with airflow breakaway edges and the tail lights of the 500 model series frame the rear end. On the new double-decker bus the two vent grilles for the engine have been joined together. Above these, the black grille of the integrated TopAir air conditioning system makes its mark. The chrome-plated badge featuring the brand lettering from the TopClass 500 catches the eye under the rear window – a perfect finishing touch for a spectacular bus.