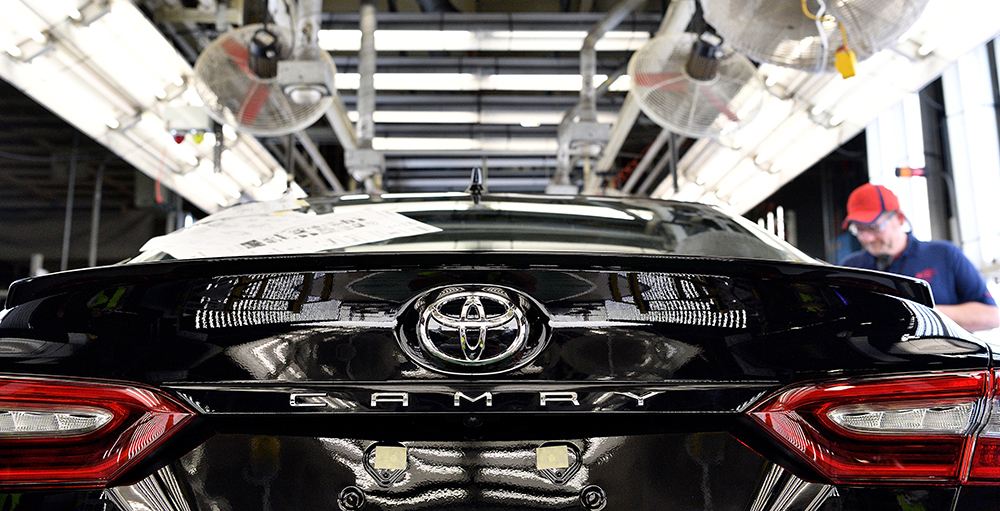 Chad Lindon has worked at Toyota in Georgetown, Ky., for 22 years and said the 2018 Camry is the most exciting vehicle launch he’s seen, and for good reason.

“The 2018 Camry takes it to another level,” said Lindon, a Powertrain production team member. “It catches the eye. It has more horsepower, better fuel economy, and new technology that customers want. That all adds up to more job security and stability for my family.”

The excitement that has been building for months peaks today inside Toyota Motor Manufacturing, Kentucky, Inc., (TMMK) as team members celebrate the launch of production of the 2018 Camry. The automaker is upping the ante by crafting an ever-better Camry that boasts an exhilarating design, refined interior, stirring driving performance, cutting-edge safety and technology, and class-leading fuel efficiency.

Lindon and co-worker Maigen Layne can’t wait to see the new models on the road. Layne, a five-year team member who works as a safety team leader in bodyweld, says “it’s the best one so far,” and plans to make it her next car. “I’m proud to work on the best-selling car in America for 15 years running. I test drove one of the first 2018 models off the line and I know it will be a big hit.”

The 2018 Camry will set the benchmark in the mid-size sedan segment. It is the first vehicle in North America designed and manufactured with Toyota New Global Architecture (TNGA), a completely new strategy to the way the company designs, engineers, and manufactures its vehicles. TNGA will improve performance of all models, including increased fuel efficiency, more responsive handling, and a more stable, comfortable feel while driving.

“The launch of the next-generation Camry is important for Toyota in America, and expands the company’s footprint in and commitment to Kentucky,” said Wil James, president, TMMK. “We are proud to be the first in North America to produce a vehicle with TNGA. It’s a testament to the skill and dedication of our team members.”

The next-generation Camry has a sleeker profile that offers improved aerodynamics, a lower center of gravity, and a more rigid body, allowing for a more comfortable and stable ride. In addition, engineers incorporated a number of new noise, vibration and harshness (NVH) countermeasures that were previously found exclusively on luxury models such as sound-absorbing insulation in the hood and upper and lower fender separator, as well as foam/vibration dampening materials throughout the vehicle. The driver-focused design also features the highest grade of soft touch and premium materials on all surfaces of the cabin – dashboard, instrument panel, center console, door trim, etc. Vehicles will begin arriving at dealers in late summer.

TMMK recently hired more than 700 people to support the launch of the new Camry, bringing the number of team members to an all-time high of over 8,000. The largest Toyota plant in the world, TMMK has produced more than 11 million vehicles in its 31 years, including more than 8 million Camrys.

Earlier this year, Toyota announced a $1.33 billion investment at TMMK for TNGA improvements and other makeovers that will modernize and streamline the production process. TNGA allows for a more flexible production environment, which will allow Toyota Kentucky to build ever-better cars and respond quicker and more capably to customer demands down the road. Since 1986, the plant represents a $7 billion investment. Across the U.S., Toyota is investing $10 billion over the next five years, adding to the nearly $22 billion the automaker has invested in the past 60 years.