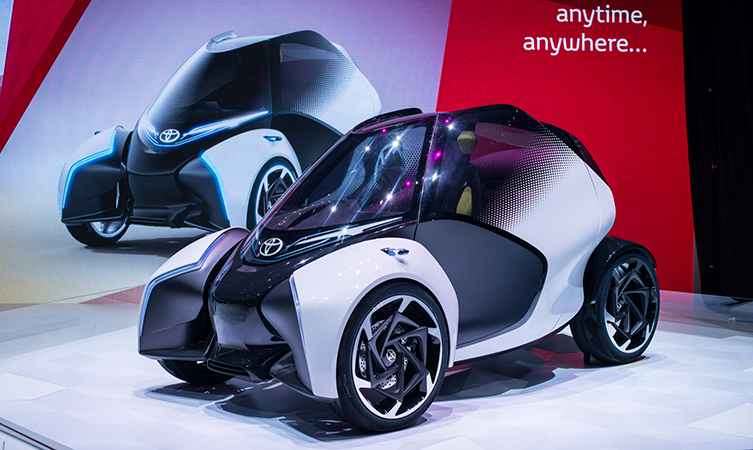 The new i-TRIL Concept has been developed by Toyota Motor Europe in collaboration with its ED2 design studio in the South of France. It showcases innovative aspects of Toyota’s research into how the company can deliver ever-better and more engaging mobility that is kinder to the environment.

The concept vehicle, which makes its world debut at the Geneva motor show, has a one-plus-two seating layout and features Active Lean technology, similar in concept to that used by the Toyota i-Road.

The i-TRIL has been developed as a viable alternative to city cars, small hatchbacks (A and B segment), other all-electric EV models and motorcycles for people who still want to have fun when driving, even at slower, urban traffic speeds.

Toyota sees the i-TRIL as a model that can help change the way people perceive EVs, true its waku-doku (translating as “beat of the heart”) philosophy for bringing more passion and driving pleasure to its vehicles. It has been designed with a specific kind of user in mind – parents who live in small or medium-size towns who need an agile and urban-friendly family vehicle that’s ideal for both chores and for social trips.

The Toyota i-TRIL is powered by an electric motor and weights just 600kg. It measures 3,000mm long and 1,510mm high, with front and rear tracks at 1,200mm and 600mm respectively. A hinge between the rear axle and the cabin allows the body and front tyres to lean while the powered rear wheels stay perpendicular to the road surface at all times.

The front wheels and wings are separate from the main bodyshell, with the cabin rendered as a dark, cocoon-like central space with no belt line or door handles. It is covered in a wrap which seamlessly changes from the body colour (also used for the front wheel arches) to a transparent glazing for the cockpit, while emphasising the powerful sense of forward motion generated by i-TRIL’s silhouette.

The butterfly-opening doors are hinged on sloping front pillars to maximise the openings for easy cabin access for driver and passengers. The doors’ design is such that they can be opened within a regular parking space – no extra room is needed.

The rear of the cabin is wider to accommodate a two-seat bench. The strong vehicle architecture is expressed by a full-width rear combination light, positioned above the visibly separate rear axle structure; the axle unit also houses the electric motor drive system.

Toyota engineers, building on their experience with Active Lean technology, determined that an angle of 10 degrees is ideal for securing better stability and grip, more driving enjoyment and a more comfortable ride for passengers.

In conjunction with 25 degrees of front wheel steering, this gives i-TRIL a four-metre turning circle (similar to that of the Toyota iQ). This means it’s not only engaging to drive, even at modest speeds, but also very much at home on congested urban streets.

It is capable of operating fully autonomously, but having been conceived to be fun to drive, it’s more likely that owners will want to drive for themselves most of the time. Its target driving range is more than 185 miles (300km) between charges.

To help secure the “relaxed engagement” experience they wanted for i-TRIL, the concept development team asked target customers to sample a range of different driving positions. The showed a preference for a higher, yet relaxed and laid-back position, almost like in a go-kart, allowing for good engagement with the steering system.

The latter point is important, because i-TRIL has no pedals. This means the driver can stretch out their legs in comfort and wear whatever kind of shoes they want without compromising their control of the vehicle. The driver’s seat cushion has a central rib to provide a snug, comfortable fit.

Steering, acceleration and braking are all controlled by drive-by-wire technology. Operation is by left and right-hand control nodes that work like computer mice or games controllers. These extend towards the driver’s hands beneath the stretch fabric that covers the manual driving module.

When i-TRIL is operating in autonomous mode, the left or right side of the instrument panel will automatically light up when the vehicle is about to enter a corner, letting everyone on board know which way the cabin is about to lean.

There are no other controls or switchgear, and no driver’s instrument binnacle. In manual driving mode, a simple head-up display gives the driver all the information they need. Taking a new approach to HMI design, the focus is on voice activation: the driver communicates with the vehicle’s artificial intelligence to control the multimedia and infotainment systems.

The Toyota i-TRIL has a one-plus-two seating layout that takes a new approach to realising interior space and spaciousness. Current interior design thinking centres on everything being built around the driver, with less priority given to rear seat passengers.

The i-TRIL interior, allied with the Active Lean technology, lets those sitting at the back become much more involved in the driving experience; it also lets children sit much closer to the adult driver without getting in the way.

More than that, they are also given a much better forward view, without head restraints blocking their sightline. The front seat headrest is fixed to the roof and pivots down when the vehicle is switched on. As there is plenty of legroom either side of the driver’s seat, i-TRIL can accommodate three adults.

Careful attention has been paid to making it as easy as possible for the driver to enter and exit the vehicle. When the doors open they also remove a section of the floor, creating a smaller footprint and allowing the driver to step out with a shorter stride. Also, the front seat can be swivelled through up to 20 degrees.

The cabin has been design specifically to avoid an overtly automotive feel. The Alcantara-like trim, rear bench seat upholstery and wooden floor finish – all made from recycled materials – create a comfortable environment that is styled more like a comfortable living space in the home.

The bench seat fabric has a ribbed texture that radiates outwards to emphasise the width of the rear cabin space. In addition, the tread pattern on the Goodyear tyres (19-inch front, 20-inch rear) has been cut exclusively to match the interior trim design.

Although there is a clear separation between the front and rear sections of the interior, the space is still unified by the overlapping of the front seat and rear bench upholsteries, and by the ducting system which distributes ventilation airflow.