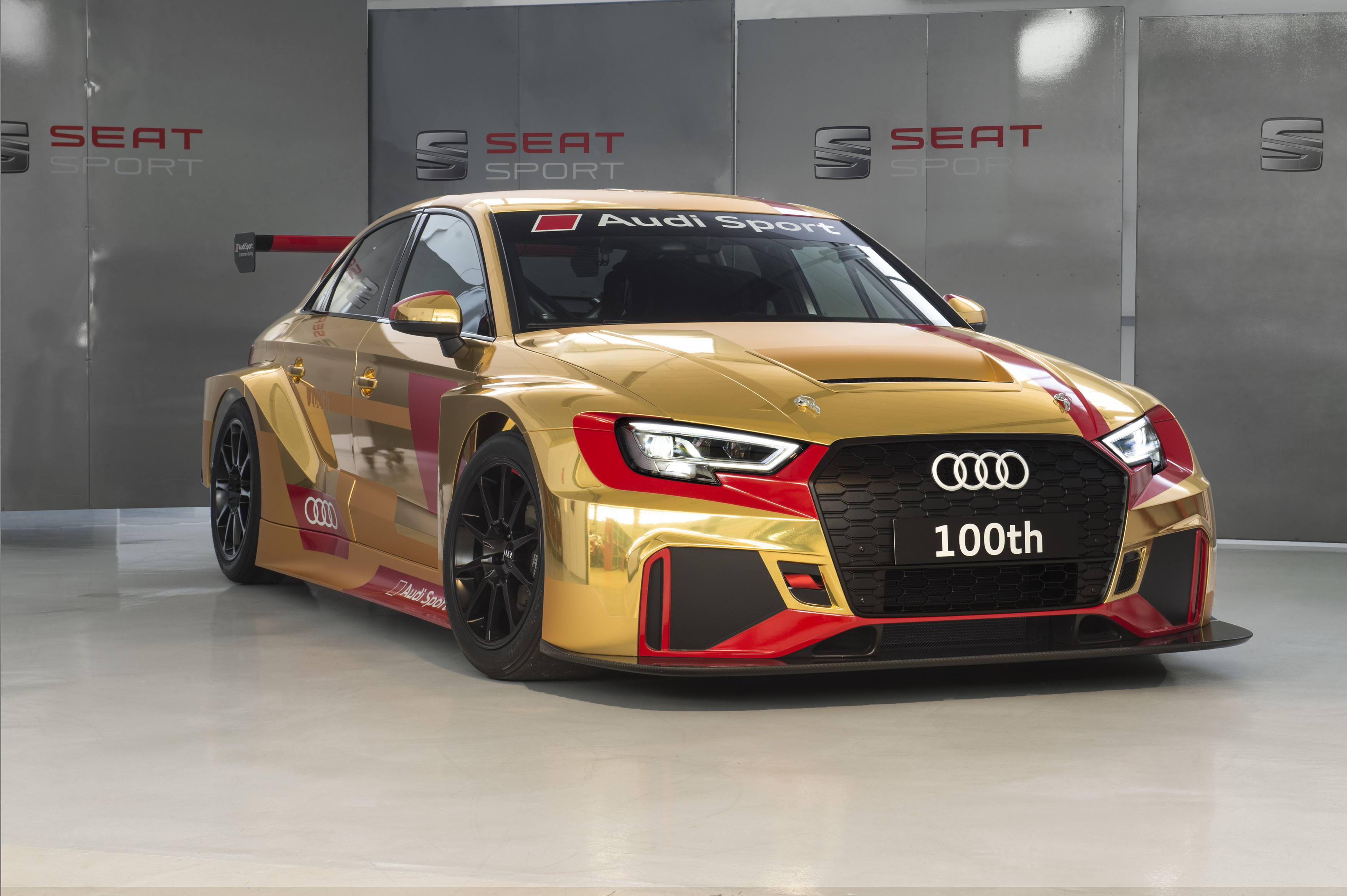 In its first year, the Audi RS 3 LMS has already been a commercial success for Audi Sport customer racing. At the first Audi Summit hosted in Barcelona, the customer racing department presented the 100th touring car from its production line.

Audi Sport customer racing celebrates production centenary of the Audi RS 3 LMS: Presented in September 2016, the Audi RS 3 LMS is not yet one year old but it is already celebrating its first great production milestone. In July, Audi Sport customer racing produced the 100th example of the 350 hp race car within the group. The group has combined the assembly of all TCR race cars of its brands at the Martorell site in Spain. Junior racing driver Joonas Lappalainen steered the golden-painted celebratory model across the stage before invited guests at the first Audi Summit Brand Show in Barcelona. On the following day, the management team of the customer racing program from Audi Sport visited the employees of the racing department at Martorell. Chris Reinke, Head of Audi Sport customer racing: “In just its debut season, we have already delivered 90 examples of our race car to customers around the world and have received preorders up to the 100th model. We’re proud that our entry model for touring car racing has gone down so well and that it is already such an important pillar of our model range. My thanks go to our colleagues in Spain for the excellent work in building our race car.” Since January, customer teams have already contested 125 races on three continents – America, Europe and Asia. They have achieved 73 podiums, including 24 victories, at both 12 and 24-hour races, among others. The TCR class is a growing international category. So far, 13 series have already been set up worldwide just for those models. In addition, there are six other circuit championships with classes for TCR models, as well as other racing disciplines such as hillclimbs, in which Audi is also present.

Two trophies for Audi customers in Italy: At the fourth of seven race weekends of TCR Italy, two Audi drivers piloted their Audi RS 3 LMS cars to podium results. Plamen Kralev from Kraf Racing finished second in the first race at Mugello, trailing the winner by only two seconds. The Bulgarian remains the best-ranked Audi driver with third place in the standings. In the second heat, Max Mugelli from Pit Lane Competizioni finished third and improved to fourth place in the standings.

Two podium results in Japan: Two Audi Sport customer racing teams achieved trophies and points in the TCR class of the Super Taikyu Series at the Autopolis circuit in Japan. Shozo Tagahara, Takuya Shirasaka and Naoto Takeda, in an Audi RS 3 LMS from Audi Team DreamDrive, crossed the finish line second in class after three hours of racing. Third place in class went to Koichi Okumura, Kei Akiyoshi and Kazuzo Ueno, who drove an Audi RS 3 LMS from Birth Racing Project. In the standings of the ST-TCR class, Audi Team DreamDrive moved up to second position after four of six race weekends.

Alessio Picariello extends his lead: Alessio Picariello is at the top of the Audi R8 LMS Cup drivers’ standings as the season passes the halfway mark. In South Korea, the Belgian increased his lead from 31 to 47 points during the third of five race weekends. In the two races at the Korea International Circuit, the 23-year-old junior driver clinched a fourth place in the first heat and then he took his third victory of the season in the second heat, finishing ahead of Cheng Congfu from China and Shaun Thong from Hong Kong. The first race was won by veteran Alex Yoong, who is also the reigning drivers’ champion. Yoong won the heat ahead of his Malaysian compatriot Mitch Gilbert and Shaun Thong. Gilbert is currently second in the standings with two events to go. 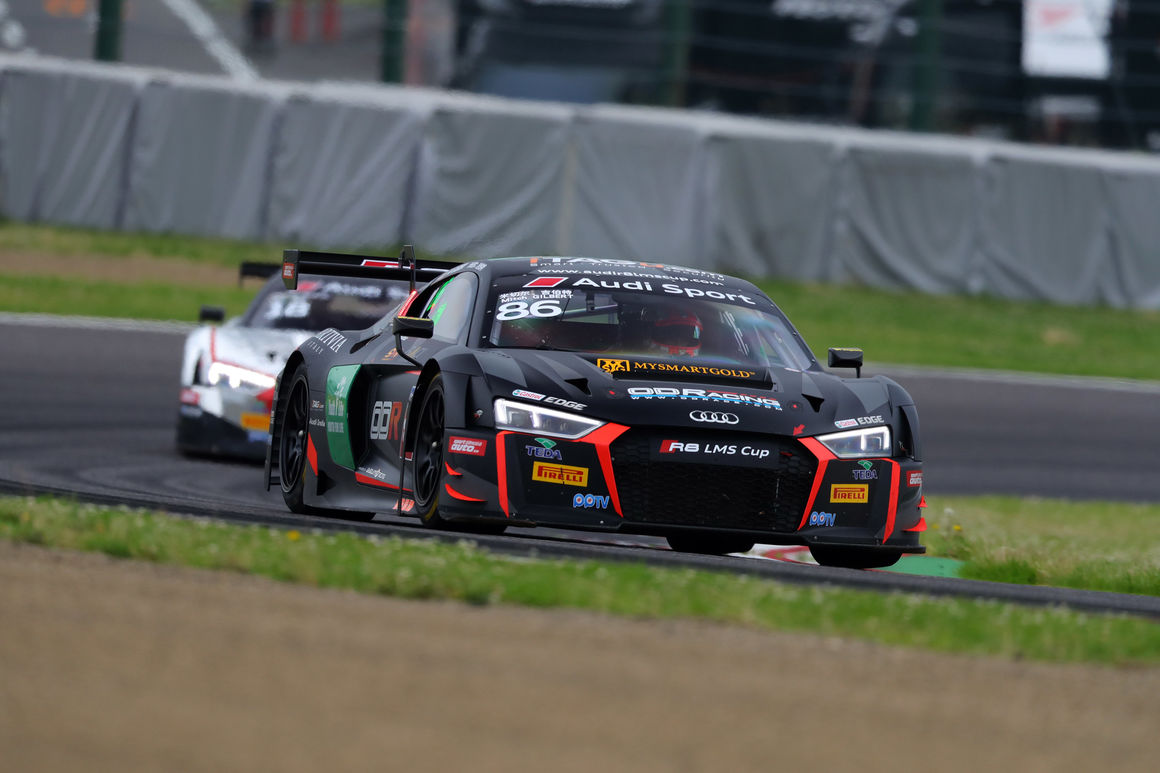 Audi Sport customer racing celebrated five international victories with its customers in competition with other brands, as well as many more trophies.

Audi drivers dominate at the Ring: The fourth of eight race events in the DMV GTC racing series at the Nürburgring was a great success for Audi customers. In the first race, Ronny C’Rock won in front of Fabian Plentz, Peter Schmidt and Tommy Tulpe. After the 1-2-3-4 victory, Audi customer teams then went on to stand on every podium step in the second round as well. Ronny C’Rock from Land Motorsport won once again in front of Fabian Plentz. Tommy Tulpe secured third place. Plentz and Tulpe also won the Dunlop 60 race as a driver duo at the same event.

Triumph for Audi drivers: In Winton, Australia, Audi customer teams celebrated a huge success with a 1-2-3 and a 1-2-3-4 victory in the second event of the Australian GT Trophy Series. The first race was won by Steven McLaughlan, in front of Rod Salmon and Rick Mensa. In the second round, McLaughlan prevailed once again. The best of the rest were Matthew Stoupas, Rick Mensa and Travers Beynon. In this racing series, only the first generation of the Audi R8 LMS is permitted. McLaughlan leads Salmon on the table with a 102-point advantage, followed by two more Audi privateers, Rob Smith and Rick Mensa.

Alessio Picariello extends table lead: A win in the first round and second place in race 2 – as was the case in the season opener in Malaysia, Alessio Picariello was at the front in the second round of the Audi R8 LMS Cup in Japan. He thus extends his lead in the cup to 31 points. Cheng Confu from China climbs to second place after he prevailed in the second race at Suzuka. Mitch Gilbert from Malaysia, after finishing second and third at the weekend, is now third on the table. The Monegasque Stéphane Richelmi stood on the podium for the first time, having finished third in the first race.

Audi driver is the international table leader: Title-defender Stefano Comini climbed to the top of the TCR International Series table in Austria. The Swiss from Team Comtoyou Racing took two third-place finishes at the Salzburgring in the Audi RS 3 LMS. At the halfway point in the season, he leads the standings by three points.

Success in Japan: The Audi Team DreamDrive finished second in the ST-R class for TCR models at the third round of the Super Taikyu Series in Japan. Third place went to the Audi RS 3 LMS of BRP Team Mie.

Podium result in Portugal: Rafael Lobato won another trophy in the Audi RS 3 LMS at the second TCR race on the Iberian Peninsula. In Portimão, he finished second 5.9 seconds behind the winner in the second round. The race counts for both TCR Portugal and TCR Spain-Ibérico.

Second place in Austria: In the P9 Challenge on the Salzburgring, an Audi customer took a podium with the RS 3 LMS. Christoph Schrezenmeier took second place with the TCR model in the middle of a field of nominally stronger Cup racing cars.