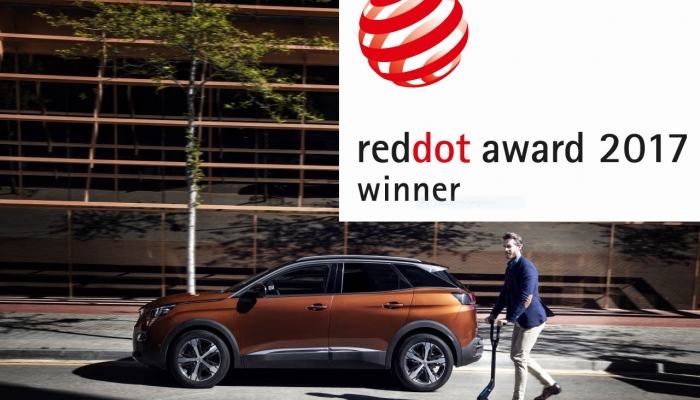 The Red Dot Product Design Awards Gala was held this year on 3 July in Essen (Germany). PEUGEOT won two awards for its innovative achievements – including the exterior and interior design of the new SUV PEUGEOT 3008. A new solution to the challenges of urban mobility, the electrically-assisted e-Kick scooter, developed in conjunction with MICRO, was also acknowledged. The Red Dot Product Design Awards are a benchmark in the world of design. Winners are selected by a jury of 39 experts.

The new PEUGEOT 3008 and the e-Kick electric scooter, which can be charged in its boot, are a winning combination. The jury was impressed by the degree of innovation in these vehicles, their ergonomic design and the quality of their finish.

The new SUV PEUGEOT 3008 stood out as much for its exterior design as for its interior design. The state-of-the-art PEUGEOT i-Cockpit® gives new meaning to being in the driver’s seat. The compact steering wheel, the customisable “heads-up” display and the touch screen with intuitive piano-key switches all contribute to an enhanced driving experience. More than 150,000 customers have ordered the new PEUGEOT 3008 since it was launched in Europe. The majority of these (83%) have requested the Allure, GT Line or GT features.

The electrically-assisted e-Kick scooter can travel the final few kilometres of a trip into the city, once the vehicle is parked. It folds up in seconds thanks to its innovative handlebar, enabling “multi-modal” travel. The e-Kick has been on the European market since November 2016. It is available for €899 (incl. taxes) from PEUGEOT outlets, certain MICRO outlets and from the PEUGEOT Lifestyle and MICRO online shops.

This is the fourth time that the Peugeot brand has received the Red Dot Product Design Award. The new PEUGEOT 3008 follows in the footsteps of the successful Traveller (2016), 308 SW (2014) and RCZ (2010) vehicles. This award brings the trophy haul of the new PEUGEOT 3008 to 27 trophies, including the prestigious Car of the Year 2017. It represents the first prestigious accolade for the e-Kick.

The new PEUGEOT 3008 will be on display on July 3rd and the e-Kick will attend the “Design on stage” show from 4 July to 6 August at the Red Dot Design Museum in Essen, Germany. In April, 39 international experts, designers, architects and lecturers chose the best achievements of the year from among 5,500 projects, hailing from 54 countries. The Red Dot Product Design Award is an international prize awarded annually since 1955.