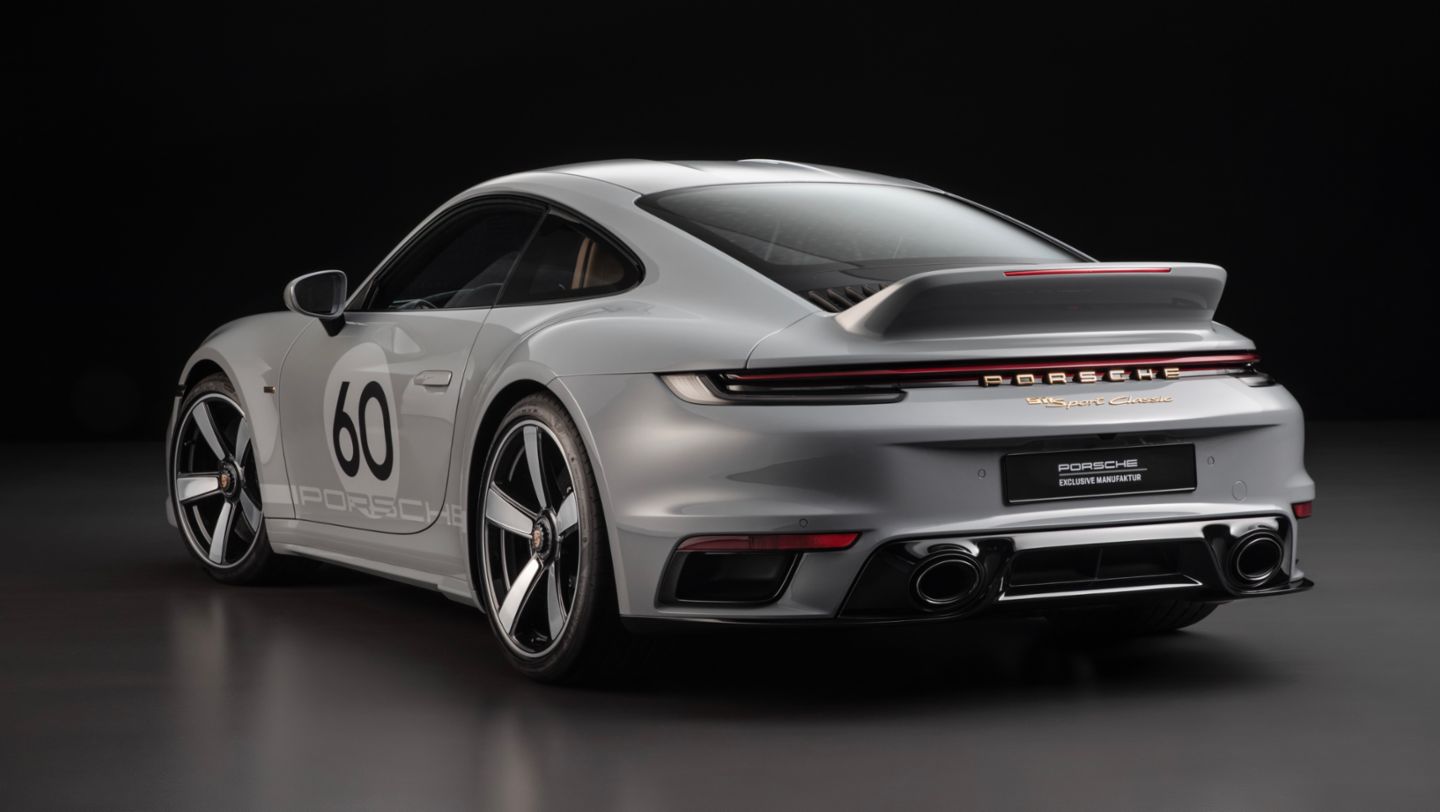 “The Heritage Design models represent the most emotionally driven concepts of the Porsche product strategy,” says Alexander Fabig, Vice President Individualization and Classic. “This unique approach sees the Style Porsche design department working with Porsche Exclusive Manufaktur to reinterpret iconic 911 models and equipment from the 1950s through to the 1980s and to revive design features from those decades.” Porsche is launching four limited-edition models over an extended period. The first of these was presented in 2020: the 911 Targa 4S Heritage Design Edition with design elements from the 1950s and 1960s.

Porsche Design has also created a high-quality chronograph exclusively available to drivers who purchase the collector’s edition vehicle. The watch seamlessly picks up on numerous details from the new 911 Sport Classic design. As part of the Heritage Design Classic package, selected interior elements of the new 911 Sport Classic will also be available for most current 911 models.

The wide body – otherwise reserved for the 911 Turbo models – a fixed rear spoiler in the style of the legendary ‘ducktail’ Carrera RS 2.7 and the double-bubble roof underscore the distinctiveness of the new 911 Sport Classic.

As with the first 997-generation 911 Sport Classic launched in 2009, the designers were inspired by the Fashion Grey paintwork of the early Porsche 356 when choosing the exclusive paint finish for the new limited-edition model. “The new 911 Sport Classic is the first vehicle to feature Sport Grey Metallic paintwork,” says Michael Mauer, Vice President Style Porsche. “Grey is never boring, quite often a statement and always cool.” As an alternative to the exclusive Sport Grey Metallic finish, the new 911 Sport Classic is also available in solid Black, Agate Grey Metallic, Gentian Blue Metallic or Paint to Sample. Twin stripes painted on the bonnet, roof and rear spoiler in light Sports Grey emphasise the car’s sporty design.

In the interior, the iconic Pepita pattern can be found on the door panels and seat centres, while two-tone, semi-aniline leather upholstery in Black/Classic Cognac provides an elegant contrast with the exterior colour.

The gearbox has an auto-blip function that compensates for engine-speed differences between the gears with a brief burst of revs when shifting down. The standard sports exhaust system is specially tailored to the model for an even more emotive sound experience.

The suspension, based on that of the 911 Turbo and 911 GTS models, meets high performance requirements: thanks to the standard Porsche Active Suspension Management (PASM), its shock absorbers respond to dynamic changes at lightning speed. PASM is combined as standard with the sports suspension, which features a 10-millimetre-lower ride height. 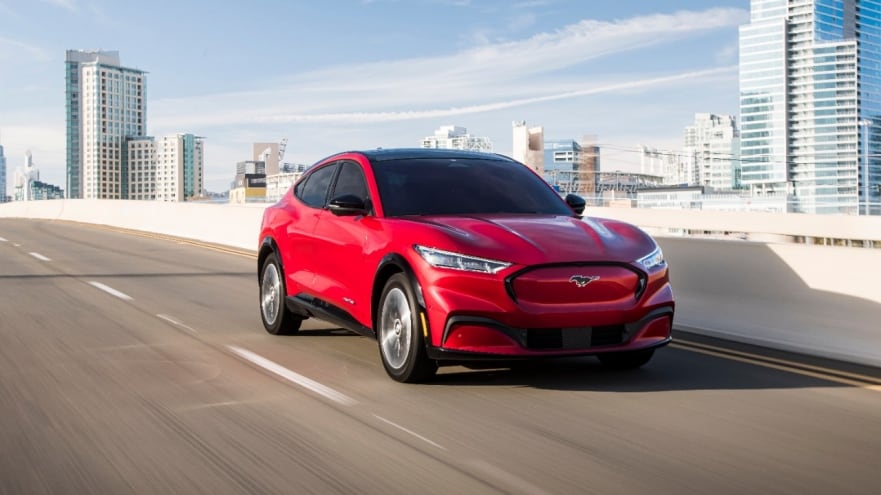 AAA analysts gave exceptional acclaim to the vehicle for its sensational new profile, its power, and for hushing up, speedy, large, and amusing to drive. Bronco Mach-E keeps on drawing client consideration also, with U.S. deals up 23% through April. 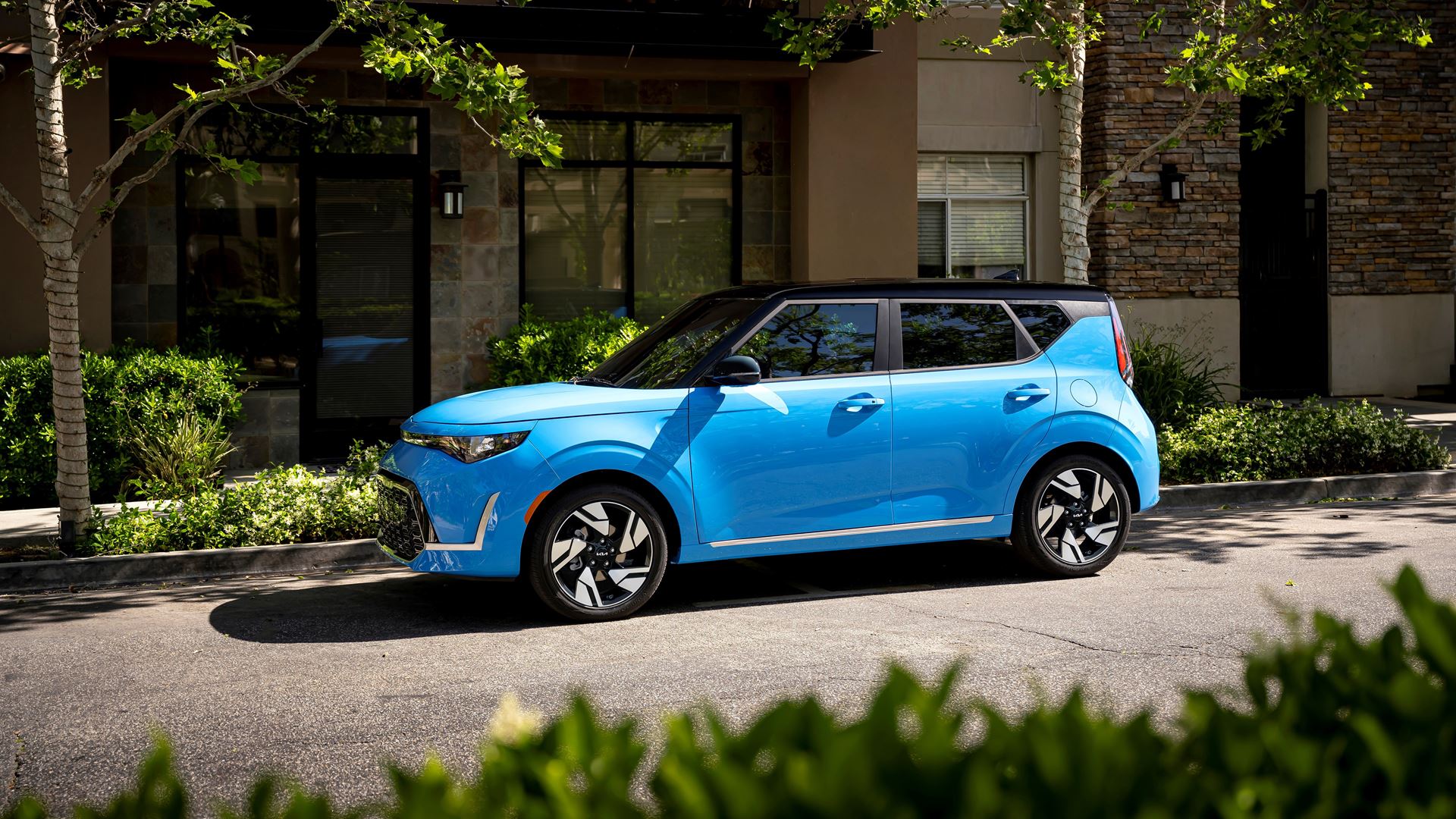 The new 2023 Kia Soul, showing up later this mid year, highlights invigorated plan components all around, an improved on arrangement, new grin instigating tones, and two choice bundles overflowing with innovation and comfort. Soul re-imagined the square shaped little vehicle portion when it was first sent off in 2009 and has advanced consistently since, speaking to clients across ages with its restless great looks, common sense, and productivity. Estimating will be declared nearer to the vehicle’s marked down date.

“The Soul characterized an entirely different section of little vehicles when it initial entered the Kia arrangement and it go on into the 2023 model year with as much tomfoolery, reasonableness and style as could be,” said Steve Center, COO and EVP, Kia America. “The essential structure remains, which is what in excess of 75,000 cheerful Soul proprietors adored such a great amount about the out of control runabout last year, addressing an almost 5 percent increment over deals in 2020. The new 2023 Soul is set to proceed with that pattern with its invigorated plan all around, cutting edge innovation and element pressed manages.”

Soul has forever been separate by its striking at this point practical plan and the 2023 model year proceeds with that custom with an all-new front sash. The new barbecue is set off with accessible LED headlights and overhauled haze lights. New Daytime Running Lamps and blinkers balance the front-end overhaul. New accessible 17-and 18-inch combination haggles overhauled back belt and taillights complete the outside improvements. A large number of strong and two-tone outside paint plans remain and are supplemented by new two-tone paint programs: Clear White with Fusion Black rooftop, and Surf Blue with a Fusion Black rooftop.

Inside, what worked best remaining parts and what has changed has improved something to be thankful for. Intelligently positioned switchgear falls promptly to-hand while the 10.25-inch (standard on everything except LX trim) touchscreen with route is a welcome expansion to the tech-forward lodge.

Working on the arrangement for 2023, the Soul is presented in LX, S, EX, GT-Line, GT-Line Tech trimlines, each including a considerable rundown of standard and accessible hardware. The X-Line and Turbo have been suspended, albeit a considerable lot of the highlights are found in the new variations. The new LX Technology Package incorporates Blind Spot Collision Avoidance (BCA), Rear Cross Collision Avoidance (RCCA), and 16-inch composite wheels; conveniently packaging pursued highlights in a generally exceptional proposition.

The GT-Line Technology Package raises the stakes with a wide scope of pursued elements and driver-help frameworks. A Harman/Kardon premium sound is gotten to through the 10.25-inch variety touchscreen and highlights an outer intensifier, subwoofer, and entryway mounted tweeters. Multi-shaded LED speaker lights beat in time with the tunes and the warmed front seats offer a warm hug during chilly climate drives. The GT-Line Technology Package likewise incorporates:

Featuring Kia America’s obligation to somewhere safe and security, various beforehand discretionary highlights are currently standard across all trims, including:

For 2023, Soul is fueled by a solitary powertrain. The effective 2.0-liter inline four chamber produces 147-strength at 6,200 rpm and sets down 132 lb.- ft-of force at 4,500 rpm through the front wheels. Kia’s Intelligent Variable Transmission is standard across all variations. 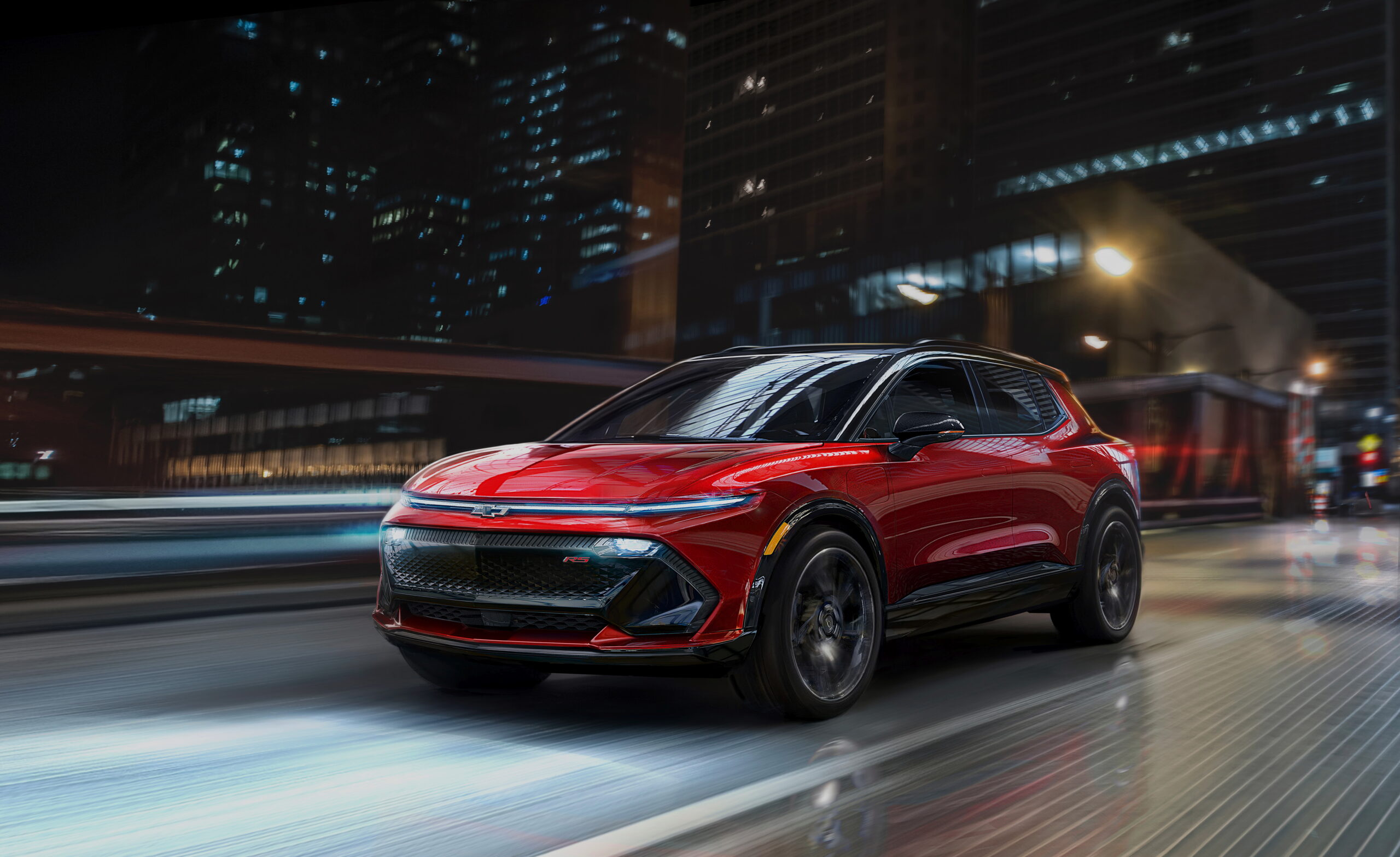 Chevrolet will extend its EV arrangement in fall 2023 to incorporate the Equinox EV, a reasonable, useful reduced SUV that will begin at an expected MSRP of around $30,0001 in the U.S. The Equinox EV, which will be sent off with both armada and retail forms, including LT and RS manages, will use GM’s Ultium Platform.

“The Equinox has consistently assumed a significant part for Chevrolet as the second-most elevated selling brand nameplate,” said Steve Hill, Chevrolet VP. “Giving a reasonable EV choice in the business’ most noteworthy volume portion demonstrates Chevy will make EVs accessible to everybody.”

The declaration of the Equinox EV comes closely following Chevy’s uncover of the 2024 Silverado EV and affirmation of the Blazer EV SUV, which will be accessible in spring 2023. 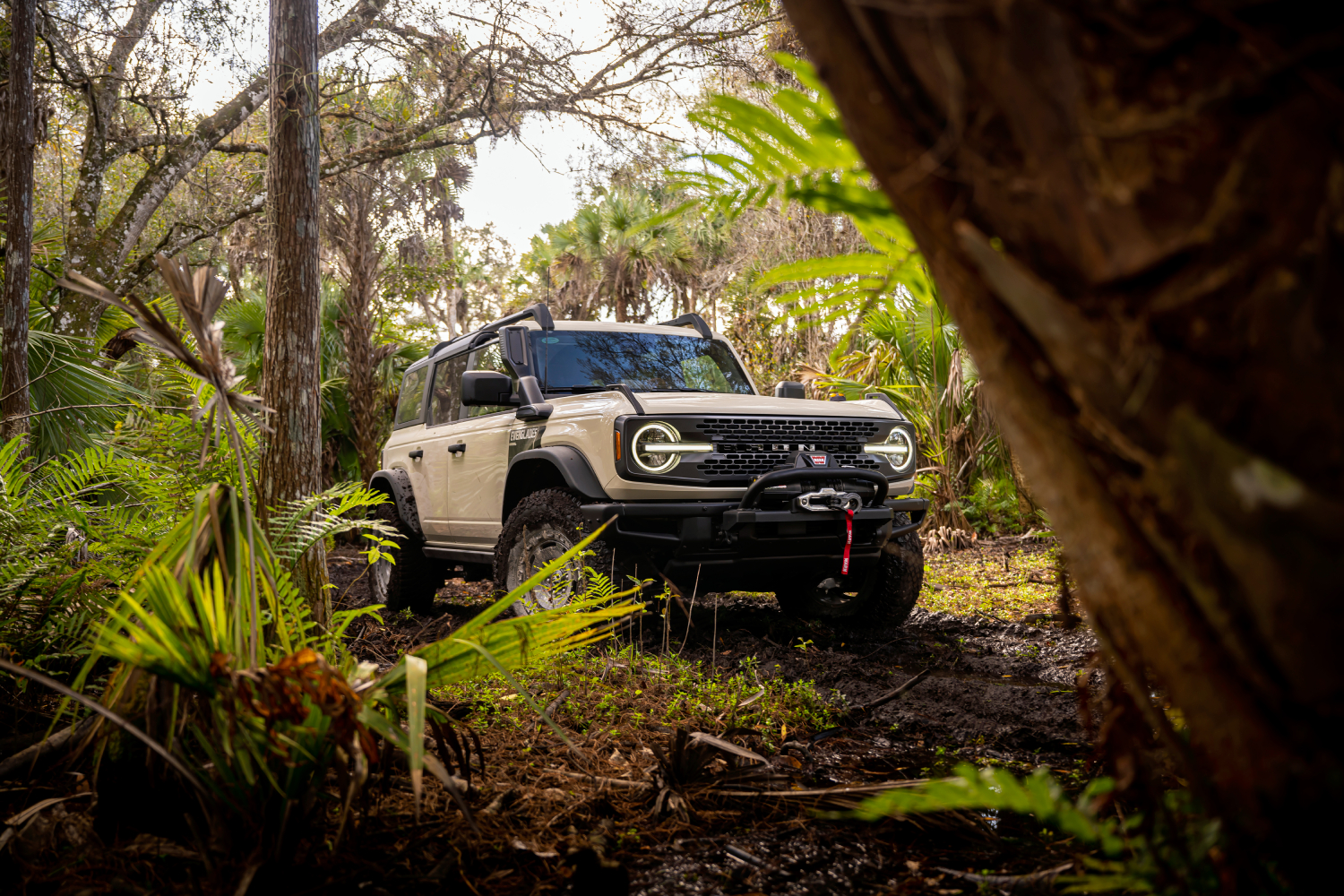 For 4×4 fans hoping to go further off the framework, Ford today is appearing the new 2022 Ford Bronco® Everglades™ exceptional release – a SUV destined to inhale when the air gets thick and intended to press on when the path turns others around.

For quite a long time, Bronco SUVs have crossed far off areas with G.O.A.T. – Goes Over Any Type of Terrain – mindset. Mustang Everglades, accessible as a four-entryway model, takes that soul to a higher level with certainty building, production line introduced highlights, for example, a snorkel, incorporated front guard mounted winch**, and all the rough terrain gear in the Bronco Sasquatch™ Package.

“Mustang clients like to investigate new spots, however a need to go much further off the path than others,” said Jolanta Coffey, Bronco boss designer. “Everglades is uncommonly prepared to empower these clients to handle considerably additional difficult territories and trails – and with the front guard mounted winch, they can help other people in the clear while they’re busy.”

Mustang Everglades presents a class-exclusive* signature swim. Planned and designed by Ford, the snorkel – which runs up the traveler side A-point of support – upgrades vehicle execution in residue, snow and water by raising the motor air consumption above terrible path conditions. Its plan utilizes two simple to-trade plates to steer the gulf in view of trail and atmospheric conditions.

“Bronco aficionados request style as well as execution, so we moved ourselves to make a snorkel with top of the line work and a look that truly suits the vehicle,” said Ryan Olsson, plan supervisor. “What truly sets the Everglades swim separated is the head and reversible admission. It totally impacts the manner in which a snorkel can look and capacity.”

For circumstances when Bronco Everglades or one more vehicle needs additional foothold past what the tires and motor can give, a rock solid particular front guard by Ford Performance with ZEON 10-S WARN® winch – highlighting 10,000-pound capability† and a 100-foot manufactured line – is prepared to help. Everglades likewise comes standard with a defensive safari bar, rock rails and a similar steel slam plates found on Black Diamond™ and Badlands™ Bronco models. A one of a kind Carbonized Gray grille with gleam dark Bronco lettering improves its practical appearance.

The Bronco configuration group exploited the SUV’s licensed rough terrain particular plan in making the Everglades version, further highlighting how this easy to use stage can be stripped to its base construction and reconfigured for one more new experience with an alternate body arrangement. The vehicle highlights interesting squared front and back tire curves with matching Sasquatch-width bumper flares.

Bronco Everglades is not difficult to clean following an end of the week on the paths with standard marine-grade vinyl situates and rubber treated waste of time flooring. New Urban Green intonations give an inconspicuous shading address snatch handles, air register vents and seat sewing.

Notwithstanding mid-bundle content, Bronco Everglades includes a class-selective 12-inch SYNC® 4 framework with Ford Power-Up over-the-air programming refreshes – a one of a kind mix in light of client input. Its 2.3-liter EcoBoost® conveys 300 torque and 325 lb.- ft. of torque†, the most force from a four-chamber gas motor in its group, and is combined to a class-elite SelectShift® 10-speed programmed transmission with cutting edge 4×4 framework and a greatest 67.8:1 slither proportion.

The new 2022 Bronco Everglades is accessible in five outside colors, including Everglades-restrictive low-volume Desert Sand, in addition to Eruption Green, Area 51, Shadow Black and Cactus Gray.

Mustang Everglades will join the Bronco arrangement of Built Wild™ 4×4 SUVs this late spring. Requesting starts in March, solely for existing Bronco reservation holders. Evaluating will begin at $53,000 in addition to $1,495 objective and conveyance charges.